Homoeopathy to combat the arsenic menace 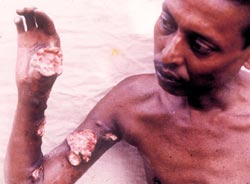 a homoeopathic medicine prepared from arsenic oxide could ease the suffering of millions of people at risk from arsenic poisoning. Researchers from West Bengal-based University of Kalyani have developed the antidote called arsenicum album. Its microdoses not only remove arsenic from the body, but they also have the ability to mitigate the ill effects produced by the toxic chemical -- they could reduce liver toxicity in mice. "If the success of the medicine could be repeated in humans, then it would be a boon to society," claims Anisur Khuda-Bukhsh, the lead researcher. In Bangladesh and West Bengal, many experts are striving to evolve techniques to decontaminate the poisoned water. "Even if these efforts succeed, the toxin would enter the foodchain via other sources; this means other approaches are a must," asserts Khuda-Bukhsh.

To prove the efficacy of their drug, the researchers conducted several experiments. Mice suffering from arsenic poisoning were fed, by drop, either distilled water, arsenicum album or alcohol (that had been through the same preparation procedure as the homoeopathic antidote) thrice a day. The research team then monitored the activity of two enzymes, alt and ast, in the blood and liver of the mice, to assess the level of liver damage. As both the enzymes are more active in mice with arsenic poisoning, their activity can be used as a marker of toxicity. It was found that arsenicum album reduced the activity of the enzymes within 72 hours, and maintained its positive effects for up to 30 days. Distilled water had no effect, and alcohol increased the activity of ast.

According to Khuda-Bukhsh, the drug solution was so dilute that it did not contain even a single molecule of the active ingredient. "It is quite amazing that such microdoses, which is produced by the dilution of the toxic substance itself, are capable of bringing about such spectacular enzymatic alterations." The researchers assert that cynics will not be able to claim that the remedy works via 'psychosomatic effects' as the treatment proved effective in rodents.

However, some scientists remain sceptical. "The study is interesting. But I do not think it is feasible to accept that such highly diluted active ingredient could achieve anything," says Andreas Gescher, a biochemical toxicologist at the uk-based Leicester University. To counter such statements, the team is striving to understand the mechanism of how their drug works.