Activists blame it on poor coordination between NACO and state; say 20,000 patients at risk 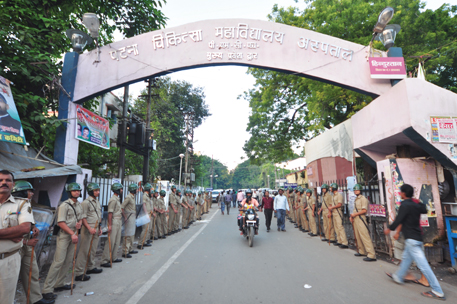 BIHAR faces an acute shortage of antiretroviral therapy (ART), the life-saving drug for HIV/AIDS patients. “Medicines are out of stock in most of the 13 ART centres for over two months now,” says Gyan Ranjan, state coordinator of People Living with HIV/AIDS, an international patient group. About 20,000 HIV/AIDS patients depend on these ART centres, which are government outlets for free distribution of the drug.

The Bihar State AIDS Control Society (BSACS) called an emergency meeting on November 19 to discuss how to overcome the shortage, but it ended without any logical conclusion. Abhay Prasad, assistant project director of Bihar State Health Society, which oversees BSACS, told Down To Earth that it was decided at the meeting to distribute HIV medicines provided by the National AIDS Control Organisation (NACO) to ART centres. But BSACS is not getting the requisite amount of drugs from NACO. How can it supply the medicine to ART centres? Prasad asked. He refused to divulge the stock figures available with BSACS.

Talking to Down To Earth over phone, deputy director general of NACO, A S Rathore, refuted the allegation. “NACO has been regularly supplying medicines to states. There was a temporary shortage of medicines about eight months ago. The problem had cropped up after we cancelled the tender of our procurement agent RITES last year. To avoid crisis NACO had allowed state AIDS control societies to procure medicines from market for a fortnight,” Rathore says, adding that fresh consignment of medicine would soon be flown to Patna.

Diwakar Tejaswi, medical director of Pahal, a non-profit in Patna, blames the scarcity on poor coordination between BSACS and NACO. “The organisations responsible for providing ART drugs blame each other for the shortage,” he says. Tejaswi points out a reason that could be hindering drug distribution. Both BSACS and ART centres are understaffed. He warns that irregular supply of ART drugs can lead to catastrophic consequences. There are 13 ART centres in Bihar to cater to the 37 districts. So, many patients travel to distant districts to avail the medicine. If it is out of stock at the ART centre, they are forced to discontinue the treatment. “Discontinuation of treatment will result in mutation of the HIV virus. This will make patients resistant to ART drugs, which is the only treatment available for HIV/AIDS at present,” Tejaswi explains.

Both Ranjan and Tejaswi say the situation is precarious in backward and poverty-stricken areas where people solely depend on ART centres for this expensive medicine required to be taken for lifetime. If purchased from private shops, it costs a whopping Rs 2,000 to Rs 3,000 a month.

Ranjan says the shortage of ART drugs is not a recent phenomenon. In November 2012, HIV/AIDS patients staged protests on the premises of BSACS demanding the medicine. But instead of providing medicines, BSACS officials called the police, which used batons to quell the protest. They also arrested Ranjan and 12 other patients and filed criminal charges against them.

Ranjan alleges that HIV/AIDS patients routinely face ill-treatment and discrimination in Bihar. There have been instances where they were denied treatment. Documentations by People Living with HIV/AIDS show that at least 35 patients, mostly pregnant women, have been denied medical attention in the past two years. Another 15 AIDS patients died due to medical negligence.

On the Independence Day this year, Meena Devi (name changed), an HIV-positive expectant mother from Lakhisarai district had to be rushed from one hospital to another until a private clinic agreed to deliver her twin babies. On September 9, a 45-year-old, HIV-positive woman from Patna succumbed to intestinal congestion for want of medical care. “Doctors at the Patna Medical College and Hospital (PMCH) refused to perform surgery on her, first on the pretext of insufficient blood stock and then due to unavailability of medicine,” alleges her son.

PMCH superintendent Amarkant Jha constituted a team of doctors to investigate the incident after patient groups raised a hue and cry about it. Jha told Down To Earth that the hospital has also assigned a special operation theatre for HIV/AIDS patients. But nothing can save their lives until HIV/AIDS patients get a regular supply of ART drugs.