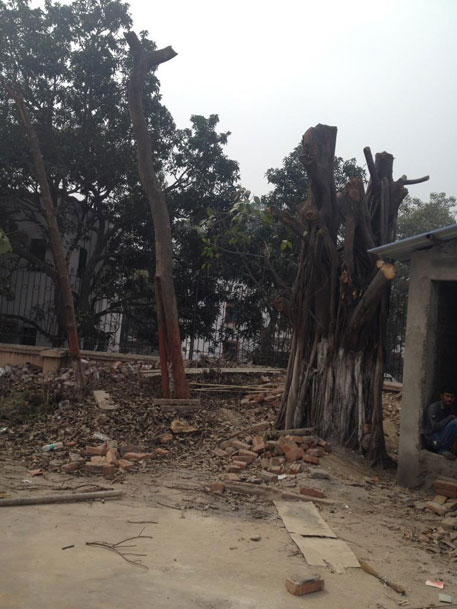 The Bihar government has imposed hefty fine and punishment on the staff and two contractors of Indira Gandhi Planetarium in Patna for illegal pruning of trees.

AtulSinha, director of Bihar Department of Science and Technology told Down To Earth that around five trees have been pruned illegally and unscientifically on the planetarium campus on Thursday. “Pruning has damaged the trees to the extent that their survival is threatened,” he said.

It has also been reported that two contractors were hired by the department for renovation and construction of a toilet in the planetarium. They decided to trim the banyan tree whose branches had beentowering over the toilet roof.

“Contractors pruned the branches without any official permission,” an employee at the planetarium said. While the two contractors have been fined Rs 30,000 each, 14 staff members have been ordered a penalty of Rs 1,000 each for not raising their voice against the “unscientific and unreasonable” act.

Sinha not only pulled up the senior staff but also sought an explanation on their deliberate silence of thinning of green cover on the planetarium campus. “Planetarium is a place of scientific fervour. Around 100 to 200 children visit the planetarium on a daily basis. If our staff is not aware of environment and science, then we are sending wrong message to the children,” Sinha said.

Probably, this is for the first time that a senior official of the government has taken a tough stand on an environment-related issue. According to a WHO report, Patna is the second dirtiest city in the country after Delhi.

Sinha added that his motive is not punishment but to make his staff aware about the environment. He opined that the staff members are the ambassadors of science and environment. The director has now also instructed the planetarium staff to ensure proper care of the pruned trees so that they can survive.

The Judgement of the National Green Tribunal regarding regarding cutting of 1189 trees for the planned widening of Highway No. 55 within Shirur and Khed (Rajgurnagar) Tehsils, District Pune, 29/01/2015

Order of the National Green Tribunal regarding cutting down of well grown trees in Bally Railway Station under Howrah Division of Eastern Railway for the purpose of putting corrugated shelter for the passengers, 17/09/2014