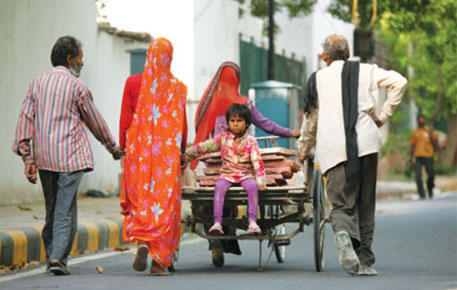 Bihar’s politicians, bureaucrats and economists are wondering what the Union Budget will have on offer after the 14th Finance Commission recommended that Centrally-sponsored scheme funds and Backward Region Grant Fund (BRGF) be curtailed for the state since it was now classified as a “performing state”.

BRGF is a part of the Bihar Re-organisation Act that was passed in 2000, when the more prosperous Jharkhand region was carved out of Bihar to form a separate state.

In a press conference on Wednesday evening, Bihar Chief Minister Nitish Kumar made it amply clear that a performing state could not be denied its rights and should instead be given priority for development.

While Kumar went ahead to threaten that he would approach the Supreme Court to seek justice on BRGF, principal finance secretary, Rameshwar Singh, appeared to be equally concerned. “After the setback of the 14th Financé Commission recommendations, our only hope for the state’s development is the Union Budget. We are expecting that the Central government will announce a compensation package for Bihar,” he told Down To Earth.

Singh pointed out that while Bihar was growing at the rate of nearly 10 per cent, this growth rate needed to be sustained to bring considerable change in the state’s development index. Even after three years of impressive growth, Bihar had the lowest literacy rate of 63.82 per cent, lowest per capita income of Rs 14,654 and second largest number of below poverty line individuals.
“Primary health, education, housing and skill development needs funds in an extremely backward state like Bihar. If we are denied compensation packages for these schemes then the development of the state will suffer a setback,” Singh rued. He added that the state was already demanding a “special state” status package of Rs 20,000 crore for its development.

Economists are equally concerned about the booming population of the state. Nearly 34 per cent of Bihar’s population falls in the age group of 10 to 24 years, 23 per cent of whom are adolescents. Worse, total fertility rate of the youth stands at 3.7. “At this rate, Bihar will emerge as a state with the highest youth population in the country by 2020. The Union government should increase funding and measures for skill development of the youth,” N K Chowdhary, economist with Patna University warns.

Debdas Banerjee, development economist and vice-chancellor of Central University of Bihar sees growing youth numbers as an opportunity. “The Union Budget should boost cottage industries in the state to boost employment and livelihood opportunities,” he says.

He adds that the food-processing and agriculture-based cottage industry will have a massive impact. Nearly 72 per cent of the state population is dependent on agriculture.
D M Diwakar, director of A N Sinha Institute of Social Sciences also says that agriculture is the biggest employment opportunity in Bihar. “Skill development programmes should be linked to agriculture not only to generate employment but also increase farm yield. This factor should be included in the Union Budget,” he says.

At present, average agricultural productivity in key cereal crops in Bihar is below the national average. The state’s productivity of rice is 1,237 kg per hectare while the national average is 2,202 kg per hectare. Bihar has already prepared and implemented an agricultural road map that focuses on boosting agriculture in the state. “The budget should make a provision for agri-based industries that will boost the economy,” Diwakar adds.

Amidst speculations about a special package to the state, principal finance secretary Singh says that the Union finance minister won’t disappoint the people of Bihar. He refused to comment about whether a bounty offered by the BJP to Bihar would be a trick to entice voters during the forthcoming Assembly elections.