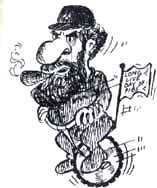 Cubans are embarking on an oil-free future by giving up automobiles for energy-efficient bicycles. Since the withdrawal of Soviet oil supplies in 1990, the number of private autos on the streets of Havana has gone down by almost two-thirds and that of buses reduced to half.

The bicycle is fast becoming a symbol of the Cuban revolution and the newest model is named Giron, commemorating the Playa Giron (Bay of Pigs) victory over the Americans. Bicycle use has increased 25 times in the last two years and with 700,000 bikes in the capital, one Havana resident in five has access to a bicycle.