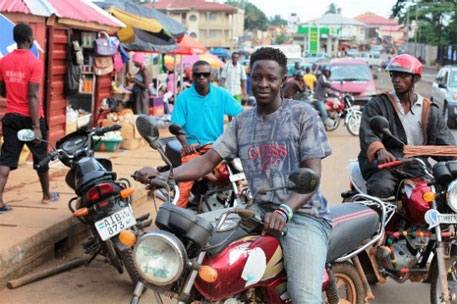 Commercial motorbike riders in Ebola-affected Sierra Leone have now started an intensive face-to-face campaign that would reach between 150,000 to 200,000 people in two months.

The campaign, organised by United Nations Development Programme (UNDP) is aimed at engaging passengers and other vulnerable groups with Ebola prevention messages as well as positive messages of the survival rate of Ebola patients who have sought early medical help. The international agency hopes that the initiative will help to reduce the number of people who are hiding suspected cases of close family members. Apart from Sierra Leone, Guinea, Nigeria and Liberia in West Africa have been affected by the outbreak.

“When the full programme is rolled out including engaging disaster management volunteers to undertake face-to-face and door-to-door sensitisation and dialogue in slums and other hard to reach areas, an estimated 300,000 to 350,000 will be reached with concrete prevention messages in the next three to six months,” UNDP Disaster Management Specialist, Hellal Uddin says in a UNDP report.

In Liberia, according to some reports, some 152 health care workers have been infected and 79 have died. A report by World Health Organization, published in Reliefweb, says, conventional Ebola control interventions are not having an adequate impact in Liberia, though they appear to be working elsewhere in areas of limited transmission. The WHO also says it expects thousands of new cases in Liberia in the next three weeks.

Also, far greater community engagement is the cornerstone of a more effective response. Where communities take charge, especially in rural areas, and put in place their own solutions and protective measures, Ebola transmission has slowed considerably.

Ebola, the deadly virus that struck West Africa in a fresh outbreak, in February this year, has claimed nearly 2,300 lives in four countries. About 4,300 cases of the disease have been detected till now.

Ebola then and now

Mapping the zoonotic niche of Ebola virus disease in Africa