In overhauling the wildlife act, MEF could ride roughshod over people's rights 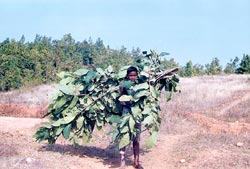 the Union ministry of environment and forests (mef) is about to drop a bombshell by tabling the Wildlife Protection (Amendment) Bill, 2002 in the ongoing session of parliament. Forestry and wildlife experts are at their wits' end, desperately trying to lay their hands on a copy of the bill. They are eager to know what has prompted the ministry to guard the bill from public opinion.

There are murmurs of dissent even among senior forest officers about the haste with which the bill is being introduced. While the director general (forests and wildlife) has categorically refused to divulge details, Down To Earth secured a copy of the document.

"An attempt to reform wildlife management in the country is a welcome step -- the last amendment was made to the original act more than a decade ago. But, we still do not know what are the premises on which they are amending it," avers Ritwick Dutta, a lawyer with the Environmental and Human Rights Law Initiative, a Delhi-based non-governmental organisation (ngo). Ashish Kothari, of Kalpavriksh, a Pune-based ngo, says, "The last time they consulted anyone on this was more than half a decade ago. Now they are talking of transparency."

The 35-page amendment purports to overhaul the entire act, beginning with the definitions. The bill, if passed, will make the existing National Board for Wildlife a statutory authority. At present headed by the Prime Minister, it will include a host of bureaucrats, besides five nominated representatives from ngos and 10 conservationists, ecologists and environmentalists.

However, the powers sought to be handed over to the board (which to date has met only twice in last four years) are puzzling. While in one portion the bill states that the board would largely be a policy reviewing body, other sections grant a number of executive responsibilities to it. The document mentions that any change to and creation of protected areas such as national parks and sanctuaries would be done on the recommendations of the board. "It will appropriate the powers of the states to recommend denotification," says Dutta.

But a more contentious issue is the alteration in the way a protected area is notified. At present, the government initially declares an intent to create a protected area. After due enquiry peoples' rights over the land are extinguished and a final notification issued. Only then people are disallowed rights over usufructs. Under the proposed amendment people's rights over usufruct would be done away with the day the government declares intent. This would leave the local people at the state's mercy with regard to traditional resources like fuelwood and fodder.

"Why does the mef want to play God? What will happen to the sense of ownership people feel over these areas which actually helps protect them?" asks a senior forest officer. "It would be significant to ascertain how many officers understand the existing act when we are trying to redefine all the notions so comprehensively," says a bureaucrat in the ministry. He cites the example of the Bhutan legislation that covers land degradation, soil conservation and wildlife management and yet is half the size of the one in India. "It's not about the number of sections in your act, it's about whether you are ready to act upon them in the field," he points out.