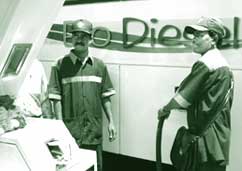 in a significant move away from fossil fuels, Mumbai-based Tata Motors, in collaboration with Indian Oil Corporation Ltd (ioc), recently rolled out 43 buses in Pimpri near Pune to run on 10 per cent biodiesel-blended fuel. The vehicles will ferry Tata Motor's staff. This is the first time in India that such a large fleet of buses will run on such fuel. The Pimpri-Chinchwad Municipal Corporation and the Pune Municipal Corporation plan to introduce such buses in their public transport system if the experiment succeeds.

"In the initial phase, 43 of the company's staff buses will ply in and around Pune on biodiesel blend, with each bus covering about 160 kilometres a day. This will help us generate data on how the fuel and internal combustion engine behave on the prolonged use of biodiesel," said V Sumantran, executive director (passenger car business unit), Tata Motors. Biodiesel is already used as an automobile fuel in North America, Europe and Africa. While these countries use edible oil to produce biodiesel, India has decided to use only non-edible oil. ioc has identified two plants, Jatropha and Karanjia, for the purpose; they are wild, not consumed by animals and grow in arid land. It has also developed a process to convert vegetable oil into biodiesel; it generates useful byproducts like glycerine and oil cakes.

Using biodiesel has many benefits. "Today 70 per cent of India's fuel demands is met through imports. Even if five per cent biodiesel is blended, it would save the country two million tonnes of diesel...Rs 10,000-15,000 crore per annum," says B M Bansal, director (r&d), ioc. In addition, sulphur emission from this fuel is negligible and emissions of other pollutants is also drastically low. But the emission of nitrogen oxides is slightly high. Biodiesel also has high lubrication.

However, the use of this green fuel is sparse, mainly because of the high cost of production: Rs 45 to Rs 50 per litre. D R Teredesai, managing director of Lubrizol India Pvt Ltd, which is supplying biodiesel to ioc and Tata Motors, says the government should offer subsidies to promote it. India has no concrete policy in this regard. Andhra Pradesh has made some headway, though; it is encouraging rural co-operatives to go for large-scale plantations of Jatropha and Karanjia. Many departments and ministries of the Union government are also working in this direction. Union minister for petroleum and natural gas Mani Shankar Aiyar is said to be framing a policy that will involve panchayats in the plantations and seed collection.