Biodiesel from microalgae becomes a reality

May be available commercially in five years 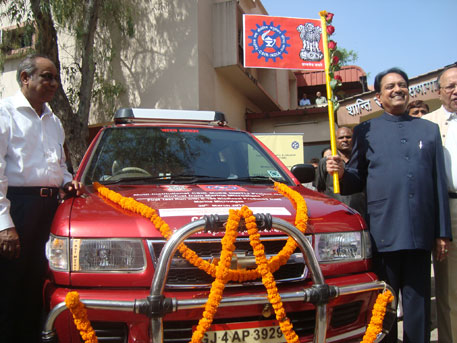 A maroon car, powered by fuel obtained from photosynthetic microorganisms, was flagged off for a test run by Union minister of Science and Technology and Earth Sciences, Vilasrao Deshmukh in New Delhi on March 30. The event brings alternative fuels from microorganisms closer to reality.

With fossil fuels set to get exhausted in the next few hundred years and the spectre of global warming looming over the planet, the world is increasingly looking at alternative energy options. Microalgae are photosynthetic microorganisms that are being touted as the next big sustainable source of clean energy. Microalgae are found in abundance in marine eco-systems and provide food for higher animal forms.

Brainchild of Council of Scientific and Industrial Research (CSIR), the project to extract biodiesel from microalgae is part of the council’s New Millennium Indian Technology Leadership Initiative. Nine CSIR labs across the country are at work on the project, which was kicked off in April 2010.

The cultivation of microalgae for the project was done at Bhavnagar in Gujarat. The algae were grown on swathes of salt pans. The oil thus obtained is called B-100 microalgae biodiesel. “I don’t know another country where this has been used for fuelling cars,” says Pushpito K Ghosh, director, Central Salt and Marine Chemicals Research Institute in Bhavnagar.

Chevrolet Tavera that was used for the test-run is a regular diesel-run MUV car. “No modification has been done to make it compatible with microalgal biofuel. It runs like any other car,” adds Ghosh. “While we were developing this diesel, we wanted to make sure that it does not compromise with any of the functions of a regular car.” He notes the mileage obtained from the biodiesel, a patent application for which has been filed by CSIR, is comparable to that of ordinary diesel.

Deshmukh says that now that the concept has been successfully tested, the government will look into how it can be commercialised in the Indian market.

Ajit Haridas, scientist at the National Institute for Interdisciplinary Science and Technology (NIIST) in Kerala, one of the CSIR labs involved in the project, says that microalgal biofuel is grown on wasteland, and does not eat into agricultural land, like jatropha and ethanol – two other sources of biofuel. BD Kaushik, professor of biotechnology at Anand Engineering College in Agra and advisor for the project, says jatropha can be harvested only every six months, while microalgae can be harvested on a daily basis.

It is a highly clean fuel and emissions are minimal, he says. When the engine was started for the test run, Ghosh pointed to the exhaust. There was no visible emission.

On when microalgal biofuel will hit the Indian streets, Ghosh says it will at least take between five and ten years.

This correspondent took a test ride in the Tavera that was flagged off by the minister. The experience was equivalent to that of any other diesel vehicle, accompanied by a monotonous hum by a diesel engine. The two-km drive around the Central Secretariat area was smooth and without any hiccups.

Haridas says there are a few major bottlenecks that need to be overcome before this technology can be commercialised. “We have to reduce the cost of production which added up to Rs 150/litre for the project,” he says “Our first goal is to make it cheaper than vegetable oils. Then we’re going to try and make it cheaper than fossil fuel,” Haridas adds.

The cost can be brought down, says Ghosh. “There are ways to go about it. Dry microalgal mass has nutrients which can be used for poultry. Also, we extracted 10 per cent of biofuel from the biomass. If we can up this to 20 per cent it will automatically cut cost,” he notes. Algae grow for 120 days a year. “If we can grow it year-long, that would be beneficial too,” Ghosh adds.

India’s diesel needs are 60 million tonnes a year, says Ghosh. “Solving the fuel crisis is a multipronged approach. One type of fuel cannot solve it. We need a combination of fossil and biofuels to combat the problem,” he states.