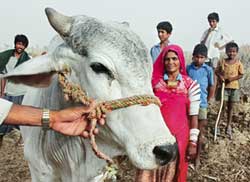 if you are living with lizards in your house, don't crib. Once in a while, one of them might drop on your table, but most of the time they are doing you a favour: free pest control.

Beyond common sense, experts say there is a link between biological diversity and human health. Many historical papers mention how sleeping in proximity with livestock reduces the intensity of mosquito attack on human beings. Livestock are a preferred target for mosquitoes and other disease-bearing pests. Soviet collective agriculture farms practised zoo-prophylaxis, putting cattle as barriers between mosquito breeding grounds and humans. According to a report published in the Public Library of Science Medicine in May (Vol 3, No 5), cows and squirrels are good examples of barriers that protect human beings from disease.

The bacterium is way more rampant in habitats that harbour only mice than those that hold a wide variety of other species. Besides, mice are reservoirs for pathogens such as human babesiosis (a malaria-like infection), human granulocytic anaplasmosis (a tick-borne infection of neutrophils) and hantavirus pulmonary syndrome (a deadly disease transmitted by infected rodents) as well.

Andy Dobson, who led the team of scientists from Princeton University asserts that such studies are significant because the threat to human health may be buffered by the presence of diverse species and that we need to understand the dynamics of their interactions.

The report adds that such research would at least serve a selfish purpose because human health is involved and people may depend on it for their own well-being. But we don't really care about losing biological diversity, do we? Coexistence is difficult, unfortunately we are not even having a shot at it.