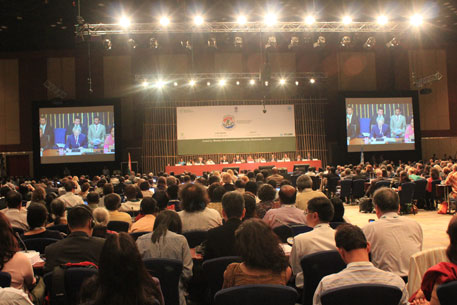 India formally took charge of the presidency of the Convention on Biological Diversity  (CBD) from Japan for the next two years on Monday at the inaugural of the eleventh meeting of the Conference of Parties (CoP 11) to CBD. Governments of over 150 countries are meeting at the conference to discuss the future course of implementation of the Strategic Plan for Biodiversity 2011-2020, agreed to at CoP 10 in 2010 in Nagoya, Japan.  The conference is on at the international convention centre in Hyderabad,

The Strategic Plan, a ten-year framework for action in support of implementation of CBD, and its 20 Aichi Biodiversity Targets, have been accepted as the overall framework for implementing action plans for conservation and sustainable use of biodiversity.

“Two years ago, in Nagoya, the world set the framework for action to achieve the Aichi Biodiversity Targets. It is crucial that this should be taken forward in an effective way,” said Jayanthi Natarajan, India's environment minister, while addressing the inaugural function. She took over the presidency of CBD from Ryu Matsumoto, former environment minister of Japan and president of CoP 10. Natarajan reiterated India's commitment to addressing global biodiversity concerns and taking the conservation process and the strategic plan forward.

Biodiversity is vital to social and economic development, and is indeed fundamental to survival, pointed out Natarajan. The goods and services provided by biodiversity not only yield global benefits but are of immense value at the local level as well, she said. "This is especially true for countries like ours where biodiversity is directly linked with providing livelihoods and improving socio-economic conditions of millions of local people."

India's ratification of the Nagoya Protocol is under way, said the minister. She urged all other parties to show their commitment to implementing the Aichi Targets and the Strategic Plan. India has formulated its National Biodiversity Act  in accordance with CBD, said the minister.

The minster pointed out that resource mobilisation for implementing the programme was the unfinished agenda of CoP 10. It remains the biggest challenge in the CoP 11, too, she said. "The present global crisis should not deter us from implementing the Strategic Plan. If we miss this chance, it would be the collective failure for us and for the future generation," said the minister.

Braulio Ferreira de Souza Dias, executive secretary of CBD, said that significant progress has been achieved in biodiversity conservation goals since the signing of the convention. "This is encouraging, but we know that we need to do more in order to realise the ambitions of the Strategic Plan and to achieve the Aichi Targets,” he said. This will be challenging, as it involves short-term funds, he pointed out. “However, the environmental, social and economic benefits will be realised in the long term.”

In line with their commitments in Nagoya, countries have been updating their national biodiversity strategies and action plans. CoP 11 is expected to review the progress in this and to reach decisions that will provide further momentum for implementation of the targets. "The Nagoya Protocol needs 50 ratifications for it to come into force but so far only six countries have deposited their ratifications with us. We urge all the member countries to expedite the ratification process," said Dias. For the effective implementation of the Strategic Plan and Aichi Targets, only eight more years are left, he reminded. He also urged the member Parties (countries) to formulate comprehensive domestic laws and make necessary policy changes in their countries in order to achieve the set targets.

“CoP 11 will specifically strengthen its engagement with multiple stakeholders, including local governments, civil society and the private sector. We need biodiversity to be discussed not as a problem but as a solution to the challenges facing the world,” he said.

The mobilisation of resources for action on the 20 Aichi Targets will be on top of the agenda. Drawing upon several reports and extensive preparatory consultations, including a recent high-level panel on financing convened by India and the United Kingdom, governments will agree on targets for mobilisation of financial resources, said Amina Mohammed, representative of the executive director of the United Nations Environment Programme.

Discussions on various other threats to marine biodiversity will also take place, including ocean acidification, marine debris, coral bleaching and underwater noise, and will feed into the broader international work on oceans, including the recent Rio+20 outcome and the UN Oceans Compact.

Measures to support restoration of up to 15 per cent of degraded ecosystems, one of the Aichi Targets, will also be under discussion. In the context of climate change and food security, the restoration target is of central importance to sustainable development, contributing to the well-being of people around the world.

A summit of cities and local authorities—Cities for Life—will be held  parallel to the CBD meet on October 15 and 16. The summit will include new commitments by local governments to implementing the Strategic Plan. A ground-breaking report on cities and biodiversity will be released on October 16. Similarly, island states from around the world will also convene a summit to discuss new commitments in support of island biodiversity.

CoP 11 comes just two years into the United Nations Decade on Biodiversity. During the meeting, a Heads of Agencies meeting in support of the Decade will be convened, where key institutions and international organisations will discuss their commitments in support of the biodiversity agenda.

A ministerial segment will be held from October 16 to 19, where heads of states and environment ministers of member countries will engage in discussions related to the key themes of the conference.

Non-profits did not seem to be amused by the glowing picture presented by the Indian government about the India’s commitment towards environment in the inaugural session. Reacting to the inaugural speech by  Natarajan, in which she said India can teach the world how to protect biodiversity, Divya Raghunandan, head of campaigns at Greenpeace India said India first needs to get its own house in order by stopping massive destruction of forests.

“Natarajan completely failed to tell the delegates that her government’s mad dash for coal will destroy at least 1.1 million hectares (ha) of pristine forest land and displace tens of thousands of forest dwellers. She was also silent on the issue of overfishing in our oceans that threatens many marine species,” she said. She alleged that the Indian government is yet to take a principled stand on marine conservation in a country that is home to 15 million fishermen and has 8,000 kilometre-long coastline. Protection of marine biodiversity is one of the key issues which will be discussed in the conference.

Probir Banerjee of non-profit PondyCAN said what the Indian government says at public platforms doesn’t reflect in its actions. He rued that on one hand the minister says India is doing a lot to protect biodiversity but on the other the government has cleared mining of Mahan coal block  just two days before CoP started. Home to about 14,000 adivasis belonging to Baiga community, the 1,084 ha Mahan reserve forest is known for its unique biodiversity. The ministry of environment and forest’s own expert body has rejected the mining proposal in this forest several times.