The Conference of Parties to the Convention on Biological Diversity, that began discussions on strategies for mobilising resources to fund biodiversity conservation on Monday, could not arrive at a conclusion on the second day of the conference on at Hyderabad. The parties have now decided to form a contact group to separately deliberate on the issue of fixing individual financial targets for the countries and a reporting mechanism.

Currently, around US $ 30 billion is being contributed globally by the Parties to CBD for its programmes. However, there have been recommendations from various groups to increase this many times over to implement the 10-year framework of action of CBD and achieve the 20 Aichi Biodiversity Targets. This is the first time that the CoP has decided to set individual targets for the countries for resource mobilisation.

During the deliberations, most of the developing countries pressed that the Parties should decide the individual targets and the reporting mechanism on the progress made during the present conference—CoP 11—itself. However, a few developing countries contended that it would be premature to come to conclusions on the individual targets and reporting mechanism during the current CoP and sought time to decide on the matter. There have also been disagreements on deciding the base year for setting individual targets. Countries that claim to have spent substantial amount on  biodiversity conservation in previous years want to set the targets on an earlier baseline, it is learnt. 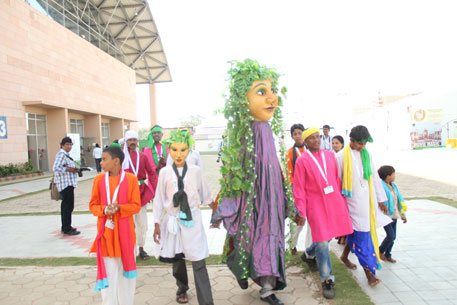 The contact group, which is expected to be formed on Wednesday, will now decide on the issue. The contact groups, with limited number of members, are formed when there are strong disagreements on a given issue. It will meet in the evenings after the main session of the conference is over. "In case there will not be any consensus even in the contact groups on the long term targets for financial resource mobilisation, it will at least come up with some interim targets," said an official with the CBD secretariat.

A different working group of CoP has agreed upon the scientific report presented on the Ecologically and Biologically Significant Marine Areas. The working group was discussing the criteria and mechanism to identify such areas and the ways to protect their biodiversity. It was also discussing the issues of protecting marine protected areas. The group is expected to come up with a mandate on the issue by tomorrow.