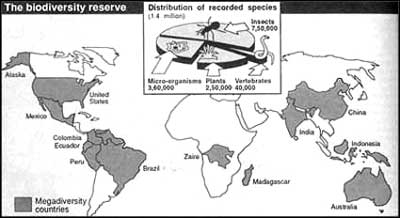 IN GLOBAL terms, existing species are estimated at between five and 30 million. Of these, only 1.4 million have been identified, of which 750,000 are insects, 40,000 invertebrates, 250,000 plants and 360,000 pertain to the microbiota. According to some recent estimates, the number of insects alone may be as high as 10 million, but many believe it is more likely to be around five million.

There are worldwide fears that this biodiversity is disappearing. The crucible of this extinction appears to be in the tropical forests. These forests are estimated to contain 50 to 90 per cent of all species on earth. At current rates of tropical deforestation, which are said to be about 17 million ha a year, scientists estimate that roughly 5 to 10 per cent of tropical forest species may face extinction within the next 30 years. But if the rate of deforestation goes up, this may prove to be a low estimate.