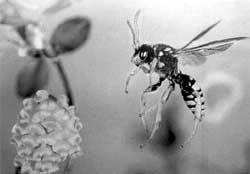 biocontrol may not be as ecofriendly as agriculturists think, scientists have found out recently. They were studying the behaviour of a parasitic insect imported by farmers to combat invasive weeds and pests -- a practice known as biocontrol.

During their study, researchers of the uk -based University of Bristol found that the non-native parasitic insects leave the farms introduced into and settle into other ecosystems close by (www . nationalgeographic.com, September 13, 2001).

Laurie Henneman and Jane Memmott, both ecologists at the University of Bristol, studied the parasitic wasps imported by Hawaiian farmers from China and Texas to prey on moths and butterflies. The wasps act as parasites by laying eggs inside the moth and butterfly caterpillars, causing their victims to die before metamorphosis. The two researchers found that these wasps instead of staying in the fields, filtrated a pristine boggy forest, many kilometres away from where they had been deployed to battle, and are now a dominant species in the forest's habitats.

They further investigated the behaviour of these wasps in the Alakai Swamp in Kauai. The swamp is higher, wetter and cooler than the lowland agricultural fields, making it a distinct ecosystem. In the swamp, Henneman and Memmott constructed food webs containing plants, butterflies, moths and the wasps. The webs provided a snapshot of who eats what in the ecosystem and how much the non-native species may have infiltrated the local habitats. After a while, the researchers collected 2,112 moth caterpillars from the swamp and reared them in a laboratory. They wanted to find if young wasps emerged from the caterpillars' bodies. They discovered that about 20 per cent of the caterpillars had wasp eggs. An overwhelming 83 per cent of the wasps that had laid the eggs were originally introduced as biocontrol agents. Fourteen per cent of the wasp species had been accidentally introduced to the islands over the years and only three per cent were native to Hawaii.

The results show that land managers need to carefully consider the possible implications of introducing non-native species as biocontrol agents. "Very few things in life are 100 per cent safe," said Henneman. "It is important for people to realise that there is simply not a control method available that is a panacea and that is without environmental effects," she added.