Seaweeds could act as indicators of heavy metal pollution in sea 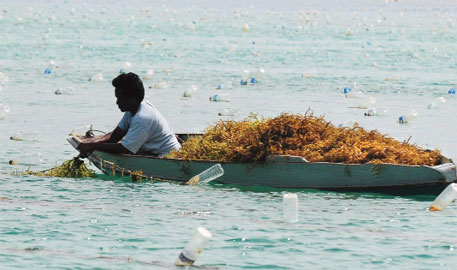 SEAWEEDS (algae) are good indicators of heavy metal levels in marine environments and could be used for monitoring such pollutants in seas. According to a new study in the Gulf of Kutch, which receives discharges containing heavy metals from several industries, various species of brown, red and green algae accumulate heavy metals from seawater and sediments. Heavy metals enter various organisms and trigger tissue damage.

They generate reactive oxygen species, such as hydrogen peroxide, which break down proteins and lipids, degrade DNA, and cause cell deaths.

The study was conducted at Vadinar and Sikka in the Gulf of Kutch. In recent years, such coastal regions have seen rapid industrialisation. The researchers measured the levels of heavy metals in various species of red, brown and green algae, in seawater and sediments and found that iron, manganese and zinc concentrations were generally high in all the algae species. Large amounts of cadmium and zinc were also found.

“People feeding on marine plants and fish might be affected by such heavy metals. Since human beings are secondary consumers, their chances of getting affected by these are high,” says Jyoti Prakash Maity from the National Chung Cheng University, Taiwan. The studied algae are abundant in the Gulf of Kutch and can be used as a biomonitor for heavy metal pollution, adds Maity. According to the US’ Environment Protection Agency, cadmium is carcinogenic and affects heart, lungs and reproductive system while lead can damage the brain and nervous system.

Researchers from the Birla Institute of Technology, Ranchi, Jharkhand; the National Centre for Sustainable Coastal Management, Chennai; and National Chung Cheng University, Taiwan, conducted the study. The results have been published in the February issue of Eco toxicology and Environmental Safety.