Biotech industry has a new patron

WHY would a company with a turnover of Rs 9,712 crore and profits of Rs 933 crore want a research loan of less than Rs 10 crore from the government? Ask the Department of Biotechnology (DBT), which has become venture capitalist to well-heeled industry. In a novel scheme that turns several concepts on its head, DBT is providing half the project costs, loans at giveaway rates and hand-holding to boot—all to encourage cutting-edge research in agriculture, healthcare and energy. It is also throwing open the expertise of the public sector organisations to companies, some of whom are acknowledged leaders in their field.

All these goodies come from the Biotechnology Industry Research Assistance Programme or BIRAP, a special partnership created by DBT with ABLE, the representative organisation of the biotech industry, and the public sector Biotech Consortium India Ltd (BCIL). With a kitty of Rs 350 crore to disburse during the 11th Plan, DBT says it expects to promote “innovation, pre-proof-of-concept research and accelerated technology and product development” in the areas of agriculture, health and energy. Such projects are being kick-started on the Biotechnology Industry Partnership Programme (BIPP), and DBT has had an impressive haul so far: Maharashtra Hybrid Seeds Company or Mahyco, Tata Chemicals, Metahelix Life Sciences and Advanta India of the United Phosphorous Group (see table).

Maharaj Kishan Bhan, secretary, DBT, told Down To Earth that the dozen-odd agriculture projects selected for funding so far are intended to discover novel genes that would provide resistance to pests and diseases, and tolerance to abiotic stresses. “Our genomics is targeted at those problems that are beyond the capability of even the best managed agri-systems,” he says.

Most of the agriculture projects are, indeed, for genetically modified (GM) crops. So far 9-10 requests for projects have been made under the public-private partnership (PPP) scheme, according to DBT adviser Renu Swarup, who heads BIRAP, and the response has been tremendous. What sets apart BIPP from other PPPs? “What we do is take on the risk,” explains Swarup, who was earlier director with DBT. “Wherever there is a high-risk project we give a combination of grants and loans. Companies have the assurance that part of the risk is mitigated. In a sense we are like venture capitalists.”

Thus, the funding, which is for roughly half the project cost, is not provided like an annual budget; it is milestone-oriented. The milestones, she says, can be set for six months or a year.

If the project does not achieve the first target, the next tranche of funding is not released. Nearly 80 per cent of the funding is provided as grant in aid and 20 per cent as soft loan at 2 per cent simple interest. The big draw indisputably is the expertise available with DBT, “the complete mentorship we give them”, says Swarup.

The easy terms of finance are clearly not the major attraction for companies that have leapt on to the BIPP platform. Tata Chemicals, for instance, is flush with funds.

With its subsidiary Rallis India having taken over the Bengaluru-based Metahelix Life Sciences in December, Tata Chemicals has three projects under BIPP. Its own project on inorganic and polymer nano-composites for micronutrient and pesticide delivery is among the high-risk enterprises and it needs DBT support for many reasons.

The clincher, however, is that intellectual property rights (IPR) of the projects rest with the company. Swarup says grants have to be returned in the form of royalties (the usual 5 per cent) but this clearly weighed in favour of the company. As one industry insider remarks, “You can’t resist such an offer.”

This is proving to be a red rag to many scientists. Plant geneticist Suman Sahai of Gene Campaign, which sees seed patents as a threat to food sovereignty, says, “The whole idea is crazy since the government is giving financial and technical support to industry which also gets to keep the IP rights.

How does it help the nation to divert public funds to the biotechnology industry which is notoriously reluctant to make its finding and data public?” she demands. 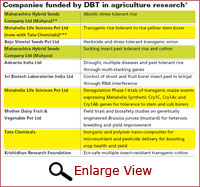 DBT’s argument is that the funding comes with a string attached: all grants have to be returned in the form of royalty, says Swarup. But the funds itself are not the issue since no project, she says, will get more than Rs 10 crore.

What could be a ticklish point is the opening up of public research institutions and experts to the private sector. All the beneficiaries, big and small, stress the technical expertise offered is the biggest draw in BIPP.

Sastry says platform for networking and partnering with government institutes and academia is a big benefit. And there is the matchless opportunity for mentoring on a range of issues.

The much smaller Bejo Sheetal Seeds of Jalna, Maharashtra, which began working on herbicide- and stress-tolerant onion in March 2010, cites the “technical knowledge of experts” as a major incentive. In the case of Mahyco, managing director Raju Barwale says BIPP provides an opportunity to work with DBT “in critical areas where technology interventions can positively impact crop productivity”. Abiotic stresses such as drought and salinity, and sap-sucking pests are major constraints in rice and cotton, he points out. Funding sanctioned for these two projects is about Rs 2 crore each, which may not make a big difference to Mahyco (revenue: Rs 220 crore in 2009-10). But even a company which introduced GM cotton in India and developed Bt brinjal, may need the vast expertise on rice available with the public sector research institutions.

Besides, as one expert pointed out: “These are only preliminary figures of funding. Projects of this nature take at least a decade to get results, so costs are going to be much higher.” In the case of Metahelix, which is working on transgenic rice and maize (costing a little over Rs 6 crore), managing director K K Narayanan says the DBT platform “is a good PPP mechanism to support innovation”. While companies are gung ho about this, others are none too happy with the underlying philosophy of the scheme which reflects the DBT chief’s views.

Bhan believes the public sector research can no longer deliver innovative products. “I have long lost the dream that public sector can do things on its own. It is a theory that makes no sense,” he says. Thus the scheme document, too, states: “National facilities, established with good intent, lack user friendliness and are under-utilised.”

An incensed stalwart of the public sector, P M Bhargava says this casts a slur on reputed institutions like ICAR, CSIR, IARI and state agriculture universities. “If DBT means no public research institute in India is capable of doing successful research, let’s wind up everything and let private industry handle it. Shut down all the premier research institutions, even the Department of Atomic Energy and DBT itself,” fumes the former director of the Centre for Cellular and Molecular Biology. But that clearly will not happen. The private sector needs these institutions far too much.

For an interview of Renu Swarup go to https://www.downtoearth.org.in/content/we-give-them-complete-mentorship

Rajasthan opens farm gates
The scientist as a babu
How competent is Indian science?
Biodiversity—India’s other scandal
Interview: We give them complete mentorship