Despite advancements, research programmes in rice biotechnology heve drawn lukewarm response because it is felt that there is little money to be made from the new varities. 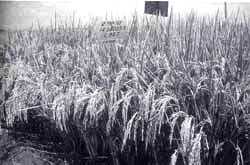 NEARLY half the world's population depends on rice for food. Yet, it was only i.n the early :980~ thaHhe crop was Included in biotechnology research to enhance yield and quality. Since then, however, while the research has thrown up break-throughs, problems have cropped up that could hinder the development of sustainable agricultural food systems.

The Canada-based Rural Advancement Foundation International says, a survey in 1983 by the US Rockefeller Foundation -a primary investor in the Green Revolution -revealed there was no research programme on the molecular genetics of rice in North America and Europe. Among developed countries only Japan had rice research programmes undertaken by private corporations and the government. As a British scientist put it, "There is little commercial interest in rice - profit cannot be made from half-a- million poor farmers."

In 1984, the Rockefeller Foundation launched the "International Programme on Rice Biotechnology" under which research programmes were initiated in institutions in developing countries, particulax:ly India and China, and in some international research institutes. The Foundation has spent about us $49 million and is the single largest source supporting rice biotechnology research worldwide. About 65 per cent of grants to developing countries go to India and China, which account fot 56 per cent of world rice production.

Researchers at Cornell University in USA are collaborat,ing on a rice genetic map that will allow the identification of important gene components. They have assembled a crude map containing 400 markers and tagged several genes of economic importanc. In China, scientists are also mapping the rice genome. By far, the largest effort is in Japan, where a public-private venture supports the world's largest gene mapping effort.

Research programmes on hybrid rice that have higher yields were initiated in China and later, in India. Varieties suitable for tropical Asia have not yet been released. Already some 10 million ha in China are under bybIid rice and in the Phillippines, the International Rice Research Institute (IRRI) is working on a progra~me to find appropriate varieties.

Seed production of hybrids is time-consuming and skill-intensive. Scientists are researching apomixis (a form of vegetative reproduction through seeds that does not involve the fusion of male and female cells) to facilitate hybrid seed production. Besides enabling easier seed production, successful apomixis would benefit farmers, who would not have to purchase new seeds repeatedly in order to maintain high yields.

Scientists are also looking for special genes in varieties of wild rice that adapt to various biotic and climatic stresses. Wild varieties do not usually cross with cultivated rice, but scientists are exploiting genetic engineering techniques to overcome these barriers.
A major breakthrough was achieved in 1987 with the production of the first transgenic (genetically engineered) rice plant by scientists at the University of Nottingham, UK. Since then, genetic manipulation of rice germplasm has taken several steps forward. Japanese scientists recently reported the development of transgenic rice varieties resistant to stripe virus -the first successful use of the viral-coat-protein strategy in a cereal crop. Genes for viral resistance using viral coat proteins have so far been engineered and field-tested only in tomatoes, potatoes and squash.

In 1991, scientists at Agracetus Inc, an American biotechnology company based in Wisconsin, discovered a new gene transfer technique that allows the introduction of virtually any gene into elite or preferred rice varieties in 8-10 weeks, circumventing other elaborate and time-consuming techniques.

Despite the advancements, there appears to be scant interest in applications. According to Agracetus senior scientist Paul Christou, there is little money to be made from genetically-engineered rice varieties. Agracetus has repeatedly offered developing countries access to its technology at cost, but Christou claims scientists from several prestigious national laboratories and IRRI are extremely reluctant to take up the offer "because of the scientists' ego."

However, Rockefeller Rice Biotechnology Programme head Gary H Toenniessen says though the gene transfer technology is offered at cost, it is far too expensive. In any case, many scientists supported by the Foundation are close to developing similar techniques. He points out, "We'd rather invest in developing a capacity that is freely available to all rice scientists than utilise a service that is more or less a trade secret."

Research into transgenic rice varieties is also not without political overtones and controversy. Conflicts between private sector and public interests and between developed country and developing country are manifest in various ways. The most contentious issues relate to the patenting of new transgenic varieties and releasing them into the environment.

Though well-intentioned, the Foundation's programme is running into heavy weather on the intellectual property rights issue. The programme seeks to ensure that those receiving grants will share material and technology resulting front Foundation-sponsored research with cooperating researchers without charging royalty for material used in developing countries. But in developed countries, Foundation-supported researchers are free to pursue intellectual property rights on their discoveries in order to obtain economic returns.


This has Jed to a curious situation. For example, Steven Tanksley of Cornell University, who is funded by the Rockefeller Foundation to develop a map of rice genes and markers in close collaboration with IRRI and other laboratories, is now offering non-exclusive licences for particular rice probes (usually radioactively labelled fragments of DNA used to identify genes) developed by them at a cost of at least US $1,000 each. The irony of the situation is that Tanksley's laboratory is designated by the Foundation as the repository and distribution centre for all rice probes and markers produced as part of the Foundation's programme.

There are environmental fears, too. Scientists are also concerned that genes from transgenic plants might get transferred to wild plants with an adverse effect on the ecosystem as a whole. They fear if herbicide-tolerant genes from transgenic rice are transferred to weeds growing nearby, the weeds would be able to resist herbicides and become a nuisance and too expensive to control.

As yet, only a few -Southeast Asian countries have adopted regulatory programmes to oversee the field testing and commercialisation of transgenic crops, unlike in most developed countries. But risk assessments of transgenic crops undertaken in USA and other industrialised countries do not take into account the fact that potential impacts may be greater in areas of plant genetic origin - such as Asia for rice -or centres of diversity.