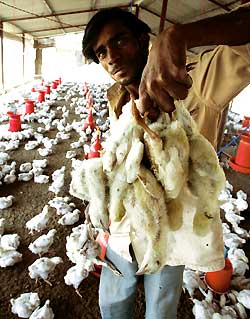 the outbreak of bird flu in India early this year has hit hard the livelihoods of poultry farmers, who are yet to receive compensation for their losses.

Most of the poultry was culled in and around the outbreak areas -- Nandurbar and Navapur districts of Maharashtra. At the time of culling, the farmers had been assured of compensation at the rate of Rs 40 a bird, but now the rate has been adjusted to a mere Rs 20 a bird. But even this amount has not been disbursed out of the Rs 80-crore compensation fund announced by the state government, mostly because of procedural difficulties faced by farmers.

Farmers have criticised the inclusion of an electricity bill for verification of eligibility for compensation, as most of the smaller farmers use gas or charcoal brooders and not electricity.

A delegation, headed by Anuradha Desai, the head of Venkateshwara Hatcheries, met chief minister Vilasrao Desmukh to discuss the problems of poultry farmers. It urged the state to implement the previous norms for compensation eligibility, such as the size of farms and the number of poultry on farms. They also asked the state to expedite the distribution of compensation, as only then would other affected states follow suit.

Though Navapur has 52 registered farms, unregistered farms of small farmers numbered beyond 100. Thus, the present verification process might leave out many small farmers who are in need of financial help. Interestingly, bigger poultry farms easily got their compensation with farmers owning over 50,000 birds, being paid Rs 10 lakh each.