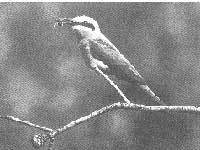 IS RATIONALITY a solely human chartersistic ? Perhaps not, contend two evolutionary biologists who applied a decision making model similar to one used for social behaviour of a bird called the white-fronted bee-eater (Merops bulockoides).

These birds, common to east and central Africa, live in joint families of five to nine individuals, representing upto four generations. They have cooperative breeders: individuals who do not mate help to raise the offspring of their relatives. The bee-eaters are monogamous birds, among whom divorce is uncommon and incest is absent (Nature, Vol 367, No 6459).

Individuals birds have to decide whether helping to raise the offspring of their kin is more profitable - in terms of gene survival - than breeding. The model developed by Stephen T Emlen and Peter H Wrege at Cornell University, USA, identified kinship and social position as two important factors guiding these decisions.

To mate, female bee-eaters 'move out of their parental nest while the male stays on. Females that leave home but fail to breed forfeit the advantage of returning as helpers to their families because 3 have to decide they are not welcome back. Single :o raise the off- females, therefore, are very choosy about whether, and with whom, to mate. And, they are less likely than males to abandon a breeding attempt.

If a female cannot find a good enough mate, it is in her interest to stay with her family and baby-sit and feed nieces and nephews instead of trying to raise her own offspring, whose chances of survival would be lower. Often, females that have failed to pair up enter into relationships with other females and even try to raise off-spring produced from an adulterous relationship, but usually with little success.

Life is easier for the males. If they fail to mate, they can help their relatives' off-spring to survive. The scientists found that male helpers were invariably those whose breeding attempts had failed or who were unable to find a mate.