Ten persons were killed in March by toxic gas from untreated effluents discharged by Century Rayon's Thane plant. The state pollution control board wants to shut the plant down, but is encountering opposition from the management and the union. 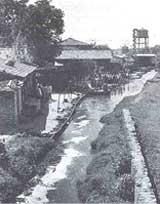 CENTURY Rayon is seeking to spread the blame for a poison gas disaster on March 17, 1993, that killed 10 villagers near the mill in Shahad, Thane district. Mill authorities have roped in three agencies to certify as safe the mill's untreated effluents that are reported to have reacted with other matter in a nullah outside the factory area to form the killer gas. Century Rayon is a division of Century Textiles and Industries of the B K Birla-Aditya Birla group.

The Century Rayon argument, however, has not impressed the technical committee of the Maharashtra State Pollution Control Board (SPCB). Says panel member S R Kamat, who is also a thoracic specialist, "Century Rayon is trying to dilute the issue by quoting from the reports of these consulting agencies." One of the three agencies, ICB Ltd, reported to the company, "Inside the premises, nothing adverse happened. However, when this effluent passed through the nullah, it came into contact with some other chemicals, which resulted in the evolution of some toxic gas." The obvious implication is that Century Rayon is not solely responsible for the mishap and the blame must be shared by other chemical units that discharged their effluents into the nullah.

Reconstructing what probably happened at 5:40 am on March 17, P S Patil of PS Industrial Consultants noted the mill's power supply had failed at the time of the accident and a mix of sulphuric acid, sodium sulphate and zinc, used in making viscose filament yarn had overflowed, but this was not noticed by the workers who were busy trying to restore electricity. The mill's effluent treatment plant (ETP) is not equipped to treat such a highly acidic mix and it subsequently flowed out to the nullah. Around 7 am, people living near the nullah were overcome by the gas. One of them was Swapan Bhandari, who told Down To Earth, "We have risen from the dead."

Kamat says sulphuric acid must have reacted with organic matter in the nullah and produced a fatal aerosol of sulphur trioxide, which "is known to affect the lungs and cause pulmonary problems. All patients showed the same symptoms, but some also suffered neurological problems. This leads me to believe a mixture of gases was formed, with carbon disulphide as the other gas."

People exposed to sulphur trioxide can suffer from longterm breathing problems. The effects of carbon disulphide are, however, shortlived unless there is residual brain damage. To determine exactly what happened and what people were exposed to, the technical committee in its report suggested a detailed medical examination of all patients as well as fresh analysis of the autopsies. This would help improve the treatment of those affected and help in formulating an environment management plan.

Meanwhile, despite Union minister for environment and forests Kamal Nath's assurance that action would be expedited against the plant, including closure, a wait-and-watch policy seems to be in force. R T Pandey of the Union labour ministry maintains actual prosecution is the responsibility of the Maharashtra government.

State officials have already directed the company to regulate the plant's spin bath recirculating system; switch over from its captive power plant to the state electricity board's supply grid; revise its emergency plan to fill gaps in existing safety measures; ensure hazardous effluents are not discharged outside the plant; and not use the spin bath process until all these steps were taken.

Company officials say it could take up to six months to implement these recommendations though the work on them has already begun. The SPCB wanted the plant to be shut down pending implementation of these recommendations, but the management and labour representatives were against this. N M Jain, senior president of the Birla company, informed the state environment secretary that as this is a continuous process plant, closure would take at least one week and restarting the plant could take up to a month. Even Kamat has indicated he favours pollution abatement to forced closure.

The management is not alone in opposing such a closure. Rayon workers' union president Rajaram Salvi warned in a press note that if the factory were closed, 7,000 workers and their families would take to the street in protest. And a plant worker, Y N Konkar, says, "If Century Rayon is closed, this area will be reduced to almost nothing. In some way or the other, most of us are dependent on the factory."

Meanwhile Century Rayon has informed state environment minister Arun Gujarathi that it is willing to pay Rs 50,000 as compensation for each death, with a ceiling of Rs 1 lakh per family. The company says it has already paid Rs 5,000 towards the funeral expenses of each victim. District collector Madhukar Patil says proceedings will be initiated against the company under the Public Insurance Liability Act, which requires victims to be paid Rs 25,000 each immediately and Rs 12,500 for medical expenses, with final compensation to be determined later.

Sandwiched between an adamant Kamal Nath and determined workers, there is no easy option for the management of Century Rayon. The plant's closure is opposed by the mill management and the SPCB technical committee. What is needed is a practical solution that ensures the welfare of the workers as well as those living nearby. All are aware that whatever is the final outcome, it will become a precedent for handling future industrial incidents.