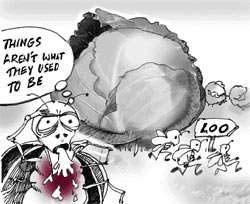 cabbage could well become the latest focus of the never-ending debate on the viability of genetic modification (gm), with a group of Indian scientists successfully developing a gm cabbage. The development might create a furore in the future, as the vegetable has been modified by inserting the gene of Bacillus thuringiensis (bt) bacteria that produces toxins, which many say are harmful for human health and the environment if they enter the food chain.

The experiments were conducted by scientists from New Delhi-based Indian Agriculture Research Institute (iari) and Hyderabad University. Working on golden acre -- the most commonly consumed cabbage variety -- the scientists inserted in it the bt gene cry i a (b), which was modified to suit the plant. "In laboratory conditions, the gm cabbage plant expressed a resistance level of 70 per cent against its most dreaded pest -- the diamondback moth," says R C Bhattacharya, one of the iari scientists. Moreover, when the insect larvae were fed on the transgenic cabbage leaves, their growth was severely inhibited. On the whole, the plants showed less insect damage compared to the non-gm varieties.

At present, most farmers use pesticides and bt insecticide to save the cabbage crop. But like others, cabbage pests have also become resistant to these. The diamondback moth alone destroys cabbage worth us $1 billion every year across the world. Therefore, faced by this dilemma, the scientists decided to modify the crop. According to the advocates of gm technology, efforts like this could go a long way in providing a suitable alternative to the farmers, as bt gene produces a variety of proteins that work as the plant's own pesticides. In fact, according to iari scientists, the amount of toxins produced by the plants during laboratory experiments were good enough to consider the transgenic plant ready for large-scale field trials. They are planning to conduct the trials after checking the gene-plant compatibility in two subsequent generations of the gm cabbage plants. At present, the first generation plants seem to have adopted the gene well. "Till date, the first generation gm cabbage plants have shown compatibility with the gene," says Bhattacharya.

Crops like maize and cotton among many others have also been modified to produce the bt strains. But according to Bhattacharya this particular invention is important, as unlike bt cotton, bt cabbage has been developed in Indian environmental conditions using an indigenous variety. One major concern about bt cotton has always been its performance in India, as the gm strain was developed in the us and then replicated here.

Benefits notwithstanding, bt has been in the eye of the storm ever since the green signal for commercial production of bt cotton was given earlier this year. The anti-gm lobby has been putting up strong opposition on grounds of possible adverse health effects and environmental contamination. It says that bt toxin could prove harmful if it gets into the food chain. With crops producing the toxins inside them, the threat becomes more pronounced, they argue. Moreover, as yet no in-depth studies in India have been conducted to test the health effects of such crops.

Moreover, taking risks is worthless as pests can even find ways to circumvent such modifications, say opponents of gm technology. "The government is committing the same mistake which it did while blindly trusting chemical pesticides," says Devendra Sharma, an agriculture expert. Anti-gm scientists also question the wisdom of investing on crops like cabbage, which are not very important for ensuring food security.