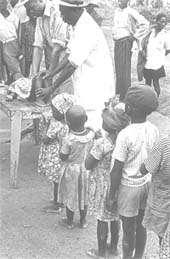 it is estimated that of the 2.5 billion people at risk of contracting malaria today, there are one billion people who are actually carrying malarial parasites. Two million to three million of them die each year. The death toll could rise to eight million a year due to the spread of parasite strains resistant to chloroquine, the most successful anti-malaria drug we know. And yet, the amount of money that is invested in basic research on malaria is 1,000 to 10,000 times less per case than that spent on aids . As medicinal sciences struggle to meet the phenomenal challenge of checking malaria, there is reason for hope from the life sciences.

Sunetra Gupta and colleagues from the department of zoology at the University of Oxford say that resistance to the most severe form of malaria can be acquired very rapidly, perhaps after just a couple of infective episodes ( Nature Medicine , Vol 5, No 3).

Their findings are based on data gathered from four different regions of sub-Saharan Africa, where malaria caused by the parasite Plasmodium falciparum is common. The study meticulously analysed this data with the help of sophisticated statistical techniques. The inputs for the statistical analysis consisted of the incidence of infections, age of victims and the severity of disease as defined by necessary hospitalisation. The researchers decided to find how the risk of getting malaria changes with age and with differing levels of exposure to infection.

Surprisingly, the statistical analysis showed that one or two infections -- one or two bites in effect -- were all that it took to develop a strong immunity against malaria that is severe enough to require hospitalisation. (This, however, did not include the most severe form of the disease, cerebral malaria, which leads to coma.) Due to this, cases of severe malaria in children are least common in areas where the risk of infection is highest, it was observed.

The researchers say a partial explanation for this may be that at a very young age, infants who live in areas with a high risk of malarial infection continue to be protected by maternal antibodies, which are received in mother's milk. Therefore, when they are weaned, they already have a level of immunity that stands them in good stead at later stages. Children growing up in areas with low risk of malarial transmission may not have the same advantage. Their chances of developing immunity are low because their chances of their getting infected are also low.

Apart from the element of surprise, what makes the findings important is the implication that an immune system-based resistance to malaria can actually be acquired. If confirmed, the findings indicate that there is some portion of the parasite that is permanently a potential target for attack by antibodies. If the nature of the target can be deciphered, a malaria vaccine will become more of a possibility, something that is considered an uncertain prospect at present.

Moreover, the line of reasoning used by the group from Oxford has important implications for public health. It suggests that in an area where the chances of transmission of malaria are high, decreasing the rate of transmission may not be helpful to exposed populations after all. It may be a good idea to allow oneself to be infected at a very early age, develop immunity, and so lessen the risk of a severe infection later.

On the other hand, use and propagation of mosquito nets, for example, may not be a smart idea. This may lead to a high probability of a serious infection later in life. However, it has to be remembered that the argument is valid only when the risk of transmission is high. When the risk is low, avoiding mosquito bites remains a sensible option.