It depends on the diversity of skin bacteria 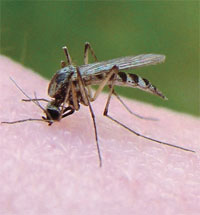 EVER wondered why mosquitoes bite some people more than others? Scientists say they have an answer.

It is the microbes on your skin that determine your attractiveness to mosquitoes. Usually, it is the body odour that attracts mosquitoes to human skin, and microbial communities on the skin play a key role in producing each individual’s specific body odour. Without microbes human sweat is odourless.

A team led by Niels Verhulst of Wageningen University in the Netherlands, conducted the experiments with the Anopheles gambiae mosquito, which plays an important role in malaria transmission in Africa. They sampled sweat from the soles of the feet of 48 Caucasian male volunteers aged 20 to 64. Feet odour is known to attract the Anopheles gambiae.

They found that individuals with a higher abundance but lower diversity of bacteria on their skin were more attractive to this particular mosquito.

Researchers speculate that individuals with more diverse skin microbe population may host a selective group of bacteria that emit compounds to interfere with the normal attraction of mosquitoes to their human hosts, making these individuals less attractive.

The research published in scientific journal PLoS One on December 28 might has implications for malaria transmission and prevention.