EXTREME weather conditions over the past few weeks have destroyed crops in several states, triggering farmers’ suicides. In all, over 300 farmers reportedly killed themselves in Andhra Pradesh (275), Odisha (36) and Madhya Pradesh (7), the worst hit states. Media reports said some of the deaths were caused by heart attacks following crop failure.

Crops in Madhya Pradesh were damaged by frost and extreme cold. Unseasonal rains in December destroyed crops in Andhra Pradesh and Odisha. Parts of Rajasthan and Jharkhand also reported crop losses. Officials said they did not anticipate such extreme weather conditions.

In Andhra Pradesh, paddy crops that were ready to be harvested were damaged by unseasonal rains in the first week of December, said Balram Nayak, additional director for agriculture. The state’s estimates say over 3 million farmers have been affected by crop damage on 1.5 million hectares (ha). Total crop loss in the state is 1.88 million tonnes.

Met officials said the unseasonal rains were caused by La Nina (weather condition induced by extensive cooling of central and eastern Pacific Ocean). In Madhya Pradesh, where instances of farmers committing suicide are rare, Udai Singh, 28, said he drank pesticide when frost ruined wheat and pulses on his 6-ha farm in January first week. He survived. “I have to repay Rs 2 lakh. Death seemed the only escape,” he said. 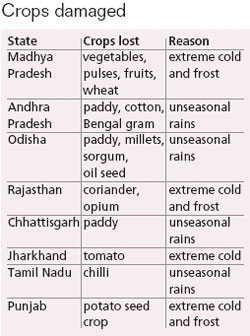 In Rajasthan, coriander cultivated in over 16,000 hectares was damaged, said J C Mohanty, state agriculture commissioner. Debjeet Sarangi of non-profit Living Farms, which works for farmers’ rights, said farmers in Odisha are perhaps the worst affected. “Our field surveys in Raigarh district showed large quantities of crops like millets and sorghum have been destroyed.

As a result, farmers don’t have funds to sow crops for the rabi season,” he said. An agriculture department official said more than 50 per cent crop loss has been recorded in 1.2 million ha of cultivable land in Odisha. He added that a team from the Centre visited the state in December to assess losses.

Met office can only predict

India Meteorological Department (IMD) officials said regions in the Indo- Gangetic plains were affected by extreme low temperatures between December 15 and January 20. “No doubt extreme temperatures have been witnessed. But it is not something new. We have to be prepared for it,” said Ajit Tyagi, director general of IMD.

But the Central and state governments are yet to roll out their plans to protect farmers from extreme weather events. Crop insurance in India is yet to pick up (see ‘New insurance lets farmers down’, Down To Earth, November 15, 2010). Farmers organisations, including Odisha Kisan Sabha and Nabanirman Krushak Sangathan, meanwhile, said farmers need loans and debt waivers.

Why do farmers have to die?
Rajasthan opens farm gates
Andhra's groundwater crisis & a trail of suicides