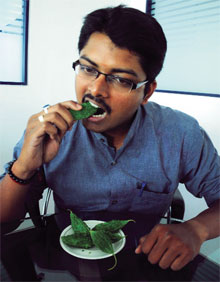 BITTER food might be bad in taste but is good for health. Scientists at University of Massachusetts Medical School in the US have found bitter substances can halt asthma attacks and respiratory problems, like chronic obstructive pulmonary disease.

These diseases are caused due to the contraction of smooth muscle cells in the respiratory system. This causes narrowing of the airways and makes breathing difficult. Generally, bronchodilators are used to treat these conditions. Bronchodilators are chemical substances that dilate or relax the airways and allow free passage of air. But bronchodilators are not very effective in severe cases and can even cause side effects, like abnormal heart rhythm and increased blood pressure. The researchers in their study, published in PLoS Biology on March 5, have shown that chemicals that give food a bitter taste can instead be used to dilate the airways.

They found that bitter taste receptors, long thought to be restricted to the tongue, are also found in the smooth muscle cells of respiratory airways. These are a protein, TAS2Rs. This led the researchers to believe that bitter substances might have a role to play in the movement of air in the respiratory system. To find out, the scientists observed the effect of bitter compounds on receptors in the respiratory airways of normal and asthmatic mice and humans. For this, they used chloroquine and denatonium, two bitter compounds commonly used in studies of bitter taste signaling. As expected, they observed that these compounds relaxed the airways.

The researchers say these compounds stimulate bitter receptors and shut down the flow of calcium, which is responsible for the contraction of the airways. “With this new understanding of how bitter substances are able to relax airways, we can focus our attention on studying these receptors and on finding even more potent bitter compounds with the potential to be used therapeutically to end asthma attacks,” says co-author of the study, Ronghua Zhuge, of the department of microbiology and physiological systems at the University of Massachusetts Medical School.

Bitter foods already find wide application in ayurveda. Extract of bitter gourd has been used to treat asthma for centuries. “The seeds of sweet gourd, a relative of bitter gourd, are used for asthma treatment in Odisha,” says L K Bharathi, a expert on bitter gourd at the Central Horticultural Experiment Station in Odisha. According to who data, 235 million people currently suffer from asthma, and it is the most common chronic disease among children. “Of late there is a significant rise in asthma and other respiratory diseases. It can be attributed to many causes, such as pollutants and allergens,” says M Palaniappan, a senior consultant pulmonologist at Apollo hospital in Madurai. “Role of diet modification, such as lesser consumption of bitter food, could also be a cause. However, there is no scientific data to support this. It needs to be explored.”