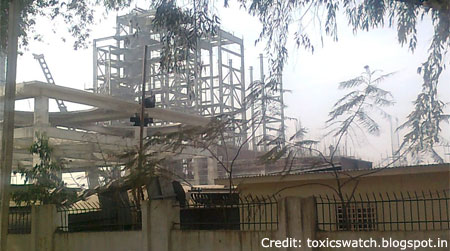 Even as candidates contesting municipal seats in the national capital make their rounds of residential colonies to seek votes, citizens and waste-pickers' associations are angered by the election manifesto of Bharatiya Janata Party (BJP). One of the promises it makes is electricity from waste by setting up incineration plants in various parts of the city. The manifesto promise is displayed prominently on billboards across the city.

The party's election manifesto promises waste-to-energy plants at three locations –Okhla in south Delhi, Ghazipur in east Delhi and Narela-Bawana in northern fringe of the city. These plants have been approved and are in various stages of construction. The Jindal-owned waste to energy plant located in Sukhdev Vihar is, meanwhile, undergoing trial runs since January despite stiff opposition from area residents for over six years now.

The manifesto has caused an uproar among the Okhla residents who have joined hands with waste-picker organisations. The residents held a press conference on April 6, demanding to know why the government was poisoning residents with toxic fumes and stealing livelihood from thousands of rag-pickers.

Residents, rag-pickers join hands
Residents and waste-picker associations made an appeal to the public, asking them not to vote for either the BJP or Congress candidates; it was during the Congress regime that the plants were sanctioned. The plants are being set up in complete violation of Constitutional and environmental rights of people, say residents. Anant Trivedi, a Sukhdev Vihar resident and member of the Delhi Pollution Control Committee set up to scrutinise the Jindal plant says, the leaders “are oblivious to our needs and deaf to our demands.” Trivedi says all reports produced before the committee raise apprehensions over incineration of waste. “It is almost like these death traps are being created for population control,” he adds.

The Okhla residents petitioned the Delhi High Court against the Jindal plant in 2009 (the next date of hearing in the court is scheduled for May 8, 2012). Now they feel they have been slighted by both the national political parties. Citing a 2008 letter by BJP MP Vijay Kumar Malhotra, residents say that till a few years back even the authorities and political leaders acknowledged the ill-effects of having such plants in populated areas. “This plant would release various types of harmful gases which will certainly pose serious health threat to the residents nearby,” said Malhotra, in the letter dated June 27, 2008 to the Lieutenant Governor of Delhi, Tejinder Khanna.

Members of waste-picker organisations, Bhartiya Kachra Intazamia Andolan and All-India Kachra Shramik Mahasangh (AIKSM), are angry over the loss of livelihood because of these plants. Dharmender Yadav, general secretary of AIKSM says: “These plants have led to the privatisation of waste collection thus restrict the waste-pickers' access to the municipal solid waste... leaving them without a source of income” (see 'Ragpickers oppose waste to energy plants').

When contacted, office bearers in Delhi BJP office said waste to energy plants are "good for the city" as they will help clean the city and generate power at the same time. Office staff of Malhotra denied any knowledge of opposition to the Sukhdev Vihar waste-to-energy plant and said the BJP leader completely supports the setting up of such plants.

What's more, several studies and reports have shown that Indian waste is not conducive for power generation; the first such plant in the city in Timarpur which was started in 1984 is shut (see 'Unfit to burn').

The harmful effects of waste incineration are not unknown to the authorities. According to Gopal Krishna of Toxics Watch Alliance the Ministry of Environment and Forests even has a white paper on pollution with an action plan that lists the dangers of incinerators. The paper reads: "… thermal treatment methods such as incineration or conversion of waste to briquettes and its subsequent use as fuel are not feasible due to the low heat value of the municipal solid waste in MCD area. The experience of the incineration plant at Timarpur, Delhi and the briquetting plant at Bombay support the fact that thermal treatment of municipal solid waste is not feasible, in situations where the waste has a low calorific value. A critical analysis of biological treatment as an option was undertaken for processing of municipal solid waste in Delhi and it has been recommended that composting will be a viable option. Considering the large quantities of waste requiring to be processed, a mechanical composting plant will be needed.

The Union ministry of urban development's own manual on municipal solid waste management states the physical composition of Indian waste is 43.59 per cent to 53.90 per cent inert material and 44.57 to 30.84 per cent biodegradable matter.