The plague bacterium genome is mapped 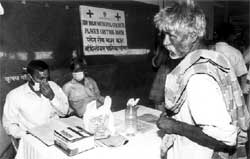 researchers have sequenced the plague bacterium's genome. Knowing the plague pathogen's genome sequence should speed the search for vaccines and treatments. The 4.65 million dna letters will be "the basis of all future work", on plague, says Julian Parkhill of the uk-based Sanger Centre.

The genome sequence will be critical in the design of antibiotics and vaccines to treat the disease. It is a yardstick against which potential new plague threats -- whether created by natural selection or as biowarfare agents -- could be measured.

It will also teach researchers a great deal about how infectious diseases evolve. The plague bacterium Yersinia pestis is a recent descendent of the benign, gut-dwelling bug Yersinia pseudotuberculosis . "Two thousand years ago it gave a mild tummy ache," says team member Brendan Wren, a geneticist at the London School of Hygiene and Tropical Medicine.

Within a few hundred years -- the equivalent of an eye blink at the evolutionary scale -- Y. pestis learned to leap between fleas and mammals, to live in the blood instead of the intestine and to cause swelling, coughing and haemorrhaging. It did so by changing its genetic wardrobe, with genetic material probably pinched from other microbes.

The key to the bacterium's rapid evolution could be a tendency to shuffle chunks of its chromosome. This seems to be common in pathogens, says researcher Mark Achtman of the Max Planck Institute for Infection Biology, Berlin.

Y. pestis carries genes for insecticidal toxins that are now deactivated but may have helped it make the first jump into fleas. Indeed the bacterium's new lifestyle left it with about 150 such pseudogenes -- redundant, gene-like stretches of dna no longer switched on in the organism. In time these may decay or be lost from the sequence altogether.

The sequence also boasts many possible disease-causing genes. But, the evidence is only circumstantial at present. To pin these genes down, researchers will need to sequence other closely related bacteria, such as Y. pseudotuberculosis , says Achtman.

Plague's small age as a disease may explain its drastic symptoms. Many researchers believe that evolution pacifies pathogens, in order to reduce hosts' immune response. Many damaging infectious diseases -- tuberculosis, anthrax and typhoid -- seem to have originated in the past few millennia.

But the main drive in Y. pestis ' evolution is probably to move better between rodents and their fleas. "The plague is only a sideshow to what Y. pestis is really doing," says Parkhill.
These days, bubonic plague can be treated with antibiotics if diagnosed early enough and public hygiene can prevent its flea-borne spread. But the disease still kills about 2,000 people each year, mostly in Africa and Asia, and the incidence is rising. A recent case was in Madagascar, where the virus was found .

In a small percentage of cases, bubonic plague reaches the lungs, becoming pneumonic plague, with mortality close to 100 per cent. No one knows what causes this transition. Pneumonic plague also spreads through the air; it is thought to have caused the major historical pandemics.

Plague is also the original biological weapon. In 1347, the Tartars, laying siege to the Genoese-controlled Black Sea port of Caffa, hurled the bodies of their plague victims over the city walls. When infected Genoese sailors returned to Italy, the Black Death killed one-third of Europe's population between 1347 and 1351.