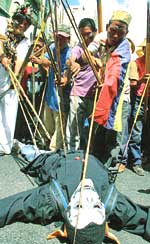 Indians from western Venezuela demanded a halt to coal mining in their region and called government efforts to formalize their ownership of ancestral lands a "fraud". The protesters said three mines were set to go into production despite a pledge by President Hugo Chavez to revoke mining concessions which damage the environment and harm indigenous communities. Chavez oversaw the adoption of the new constitution which recognises indigenous groups' collective ownership of ancestral lands. Yet, Leonardo Martinez, chief of the Tukuko community, doubted its benefits to his community.