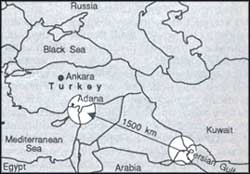 The climate over parts of Turkey was severely affected in 1991-92 by heavy smoke billowing from Kuwaiti oil-wells set ablaze in the Gulf War. Hunay Evliya, a chemistry professor in the southern Turkish town of Adana, said the smoke led to black rain and the winter was the coldest recorded in Turkey (Environment, Science and Technology, Vol 26 No 5). A lot of snow fell on the normally subtropical Mediterranean coasts of Turkey, Syria and Lebanon in January and February this year.

Black rain fell in Turkey for a few days after the oil-fields were set afire and sunshine decreased by 25 per cent. Huge clouds of smoke rose to a height of 3 km and travelled eastwards. A cyclonic whirl over the eastern Mediterranean collected soot, oil and other constituents of the burning oil in the lower levels of the atmosphere and this fell as black rain. Turkish scientists found the rain contained several substances present in Kuwaiti oil. The effects were also seen a year later.