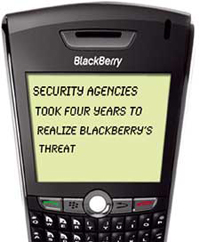 The government has suspended services of certain services of BlackBerry, one of the latest communication technologies. The wireless hand-held device that allows you to exchange e-mail over the network of a few mobile phone service companies has been deemed a security threat. The security problem arises because the mail is encrypted while travelling in the wireless network and can only be decoded in BlackBerry servers located in Canada. Security agencies in the country do not have the technology to decrypt BlackBerry messages on the wireless network and Blackberrys owners, Canada-based Research in Motion (rim), are not bound by Indian laws to share the decrypted e-mail data lodged in their servers.

It has taken security agencies four years to perceive the threat from BlackBerry. The telecommunication service was launched in India by Airtel in 2004. Subsequently, other telecommunication operators like Reliance Communications, Vodaphone, Essar, bpl Mobile offered BlackBerry services without any formal application to the government. Using BlackBerry enabled phones gradually became a status symbol and the number of BlackBerry users in India rose to 400,000 in 2007 according to industry sources.

The government woke up to the security threat when Tata Telecom applied to the Department of Telecommunications (dot) to provide BlackBerry services to their customers in 2007. Tata Telecoms application was rejected on grounds that Blackberry could be used by insurgents to send e-mail messages, which Indian security agents would not be able to track.

dot held several meetings on the issue, but could not come up with any solution. rim was asked to place its servers in India, but the company did not respond to this request.

With no solution in sight, the minister for telecommunications, Jyotiraditya Scindia, told Parliament in April that, Instructions have been issued to all mobile service providers, inter alia, asking them not to connect or provide/run certain BlackBerry services unless the required monitoring systems are in place. dot officials say that the ministers Parliament statement stands and refused to comment further on the issue.

rim has also refused to comment, saying it was a security and regulatory issue over which it had little say.

The industry has expressed disapproval of the governments handling of the BlackBerry issue. Several other technologies that rely on encrypted messages are in use. So why target BlackBerry? Satellite phones are a much bigger menace, but they are not talked about, says K V Seshasayee, a telecom advisor.


Government sources do acknowledge that satellite phone is a problem. There are international protocols for tracking satellite messages but they cannot be implemented in India because we do not have the technology to do so, says source in the government who did not want to be named. Officials were not clear whether Skype, a popular technology, which allows conversation over Internet via encrypted messages could be tracked or not.

The BlackBerry fracas is about lack of technology, says Vikran Tiwandhia, head of Information Technology at the Confederation of Indian Industry. He has a point. The government lacks technology to decipher highly encrypted messages. Its sources say this is because the country still depends on the us for technology to decrypt messages. While the us government has technology that can decrypt up to 1048 bits, digits of a moving message, the decrypting machines we have bought from us can decrypt only up to 48 bits.

New Delhi needs to be wary of us control decrypting technology, many experts say.