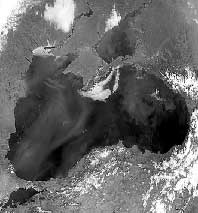 the Black Sea is declining as a result of chronic overfishing, high levels of pollution and the devastating impact of alien species, an international team of scientists has warned. The members of the team are part of the Global International Waters Assessment (giwa), an initiative led by the United Nations Environment Programme (unep). According to giwa scientists, the environment, wildlife and people linked with Black Sea are also under threat from the unbated discharge of raw sewage and damaging levels of coastal erosion. During the past 20 years, around a third of the sea's fish stocks have been lost, the giwa team reports. Only six of the 26 species commercially exploited in the 1960s remain, with decreases in sturgeon, salmon, gray mullet, sprats, horse mackerel and goby. Along with overfishing, trawling has also damaged marine life. Dag Dagler, project manager of giwa, says the Black Sea is "an acute example of the many problems facing water systems worldwide and could prove to be an ideal blueprint for saving many of them."