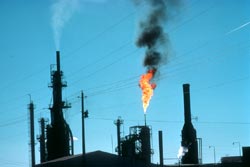 eastern us, western and southern Europe, and eastern China -- some of the most industrialised regions in the world -- are also the most polluted areas. So says a recent study conducted by researchers from the us-based National Centre for Atmospheric Research (ncar). The researchers pinpointed these areas by combining data from four satellite imaging systems belonging to the National Aeronautical and Space Administration and the European Space Agency. They focussed on atmospheric levels of three pollutants: carbon monoxide, nitrogen dioxide and aerosols.

The researchers found that the levels of pollutants vary somewhat by season. In eastern China, for example, urban-industrial emissions of nitrogen dioxide spike during the winter. In the spring, however, aerosol levels are especially high, both because of industrial activities and because of winds that blow in dust from the Gobi and other deserts to the west. Once airborne, the pollutants often drift eastward and diminish the air quality in neighbouring areas. The research, for example, shows that carbon monoxide, nitrogen dioxide, and aerosols from China flow eastward over Japan and the north Pacific Ocean.

Apropos this, another study conducted by researchers from US-based University of Harvard, says that at least for now, industrial air pollution wafting across the Pacific Ocean on prevailing winds is levelling off, due to Asia's economic slowdown. For years, atmospheric chemists have been watching Asia closely because many areas, China in particular, were predicted to undergo massive industrial expansion and so increase emissions. But between 1997 and 2001, carbon monoxide levels of Asia remained the same, says Daniel Jacob, an atmospheric chemist at the Harvard University. "Who would have thought this might be the case? Ten years ago we thought emissions from Asia were skyrocketing."

However, some researchers disagree. According to them, migrating emissions are quite high. Ozone levels in air reaching the Californian coast increased by 30 per cent between 1984 and 2000, says David Parrish of ncar. "This gives us less and less leeway to keep below the standard," says Parrish. This might be true, but it's important not to single Asia out, warn other researchers. "Emissions from North America and Europe are just as large," says Allen Goldstein of the University of California, Berkeley, usa.