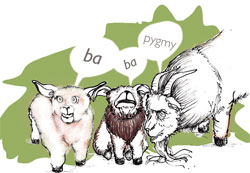 Pygmy goats can develop “accents” as they grow older. Researchers found that when young goats mixed in their older social groups, their calls became similar. Elodie Briefer and Alan McElligott from Queen Mary’s School of Biological and Chemical Sciences at the University of London published their results in the journal Animal Behaviour.

The scientists recorded goats’ calls when they were a week old and again when they were aged five weeks. “Five weeks corresponds to the time when, in the wild, they join their social group after spending time hidden in vegetation to avoid predators. We found that genetically related kids produced similar calls. The calls of kids raised in the same social groups were also similar to each other, and became more similar as the kids grew older,” Briefer explained.