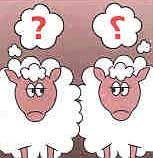 IT TOOK a simple laboratory dish to create one of the most awesome break- throughs in science - hundreds of genetically identical sheep. The feat was recently performed by Ian Wilmut, Keith Campbell and their colleagues at the Roslin Institute in Edinburgh. The process itself does not seem too complex - taking an embryo from a pregnant sheep and allowing it to multiply in culture dishes; removing eggs from female sheep and then stripping them of their genetic material; and finally, fusing the cultured cells with the eggs in test tubes to create new embryos with similar genetic material. These were then-implanted in a surrogate mother sheep. And the result: the first two genetically alike sheep, christened Megan and Morag.

What the future could hold for these experiments is tremendous. In theory, the technique would hold good to create identical humans. Imagine an array of budding Einsteins or Kasparovs dotting the earth. "It's very impressive," said David White, a lecturer at the Cambridge University and a founder of Imutran, a biotech company producing genetically engineered pigs, of the Scottish achievement.

While cloning has been conducted in laboratory animals like rats and rabbits with partial success, this is the first time that it is being carried out in a larger animal. "The production of cloned off- springs in farm animal species could provide enormous benefits in research, agriculture, and biotechnology," according to Campbell and his colleagues. Cloning of sheep itself offers immense possibilities - sheep with better wool, stronger hooves and greater resistance to diseases could be produced by adding the right genes to the cultured cells. Further, the new"process fastens the introduction of a new genetic trait in animals, while earlier it used to take years of cross-breeding to develop the same.

A word of caution, however. A sudden outbreak of a disease, to which resistance has pot been developed, could catch the identical breeds unawares, leading to a mass extinction.

This is what had occurred in Chile sometime ago, when asexually produced blackberries were ravaged by a rust fungus which did not affect the sexually produced variety. Ultimately, diversity in nature is a fat more pleasing sight than unending streams of similar animal and plant species.