Antarctic microbes could be rampantly exploited to benefit a few 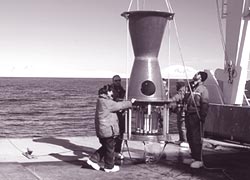 after plundering biodiversity hotspots of the South, the ambitious biotech industry is now eyeing Antarctica. As per a report of the Tokyo-based United Nations University, the continent's microbes, with their unique biological properties, have already become targets of "free-for-all" exploitation.

While tourism and mining are banned or regulated on the continent, there are no specific rules to check 'unmindful bioprospecting' -- the search for commercially valuable microbes. What allows these organisms to endure one of Earth's harshest environs? The answer could lead to new drugs and industrial compounds. But, states the report, "efforts to exploit this new frontier threaten to outpace the capacity of national and international laws to regulate...ownership of genetic materials, issuing of patents... and the environmental consequences of harvesting these resources".

Indeed the gold rush has begun -- 92 patent applications referring to Antarctic organisms or molecules have been filed in the us; 62 are also lined up in Europe. The food giant Unilever has already patented a protein extracted from a bacterium found in Antarctic lake sediments; the protein prevents formation of ice crystals in ice-cream.

Though private firms are not allowed to scout for the microbes, many companies of the developed nations have access to the resource through public research agencies. "Such associations make it difficult to draw a clear line between scientific research and commercial activities," states the report 'The international regime for bioprospecting -- existing policies and emerging issues for Antarctica'.

The Scientific Committee on Research -- the advisory body of the Antarctic Treaty system -- has also raised concerns about bioprospecting in its recent report: "There are obvious environmental ramifications of the commercial ventures." The companies are bound to harvest the organisms if they fail to produce the useful compounds through a synthetic process. Such exploitation, if carried out rampantly, will result in the extinction of many species, opine scientists.

Bioprospecting will also prove to be detrimental for scientific quest, asserts S Sivaji of the Hyderabad-based Centre for Cellular and Molecular Biology. Researchers working for public research institutes would be bound by confidentiality agreements if their organisations tie up with private firms to exploit the continent's booty. Such agreements will impede publishing results of crucial experiments; it may also come in the way of investigating the full potential of the organisms discovered. "Such limits are contrary to the two major ideals enshrined in the Antarctic Treaty -- freedom of scientific investigation and international cooperation," assert researchers.

The only way out is stringent regulations to control bioprospecting, which would be binding for all the signatories of the treaty. "If need be, India along with other like-minded countries would take up the matter at the next Antarctic Treaty Consultative Meeting (atcm), which is the policy-making body for the continent," reveals P C Pandey, director of the Goa-based National Centre for Antarctic and Ocean Research -- the coordinating agency for India's Antarctica expedition.

Some experts, however, do not agree with Pandey's suggestion as atcm is controlled by developed nations, who would protect the interests of their companies. Even though Antarctica is said to be the domain of global commons, only the 27 signatories of the treaty -- with only a few from the developing world -- have a say in the Antarctic matters.

In such a situation, bioprospecting would not benefit most developing nations. It also means that plans of non-treaty nations to make the continent the "common heritage" of humankind may be stalled forever and Antarctic expeditions will never truly graduate to universal scientific programmes.