What appear to be vestigial or redundant organs need not be so, as the Spalax ehrenberghi teaches us 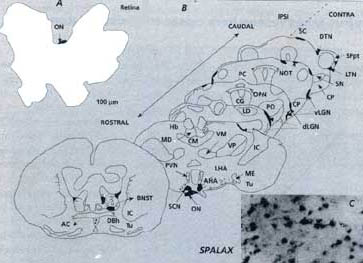 THE fact that evolution optimises structures is best exemplified by cases of regressive evolution. These refer to structures that are not 'needed'. Such structures wither away because they are superfluous and because maintaining them is a waste of energy.

Spalax ehrenberghi is a rodent that lives in dark underground tunnels. Its eyes are the smallest in size among mammals and are entirely covered by skin. Correspondingly, connections between the eyes and the brain are few and most of the visual areas of the brain are reduced in size (Nature, 361).

H M Cooper, M Hebin and E Nevo of the Museum of Natural History in Paris report that contrary to belief, the Spalax ehrenberghi does have vision but does not use its visual powers in the conventional sense. By tracking the paths followed by nerve fibres, it was found that compared to terrestrial rodents, only a tiny percentage of the fibres made connections with those regions of the brain that specialise in perception and object identification (the lateral geniculate nucleus) and object localisation (the superior colliculus).

However, fibres from the animal's eyes to another region of the brain tell a different story. Retinal projections to the hypothalamus are not just preserved, but enhanced. Among mammals, the hypothalamus, or rather a portion of it called the suprachiasmatic nucleus (SCN), receives retinal inputs that provide a sense of time. These messages are essential for regulating the timing of one's daily activities as well as the seasonal time-table which is governed by endogenous rhythms.

The SCN in S ehrenberghi is the same size as in other rodents. It would appear that the disproportionate amount of retinal input it receives is an evolutionary adaptation. But even though its eyes are covered by skin, some light does penetrate them during the brief periods when it surfaces; and it is known that light can regulate the rhythms of movement and temperature in S ehrenberghi. The interesting lesson to be learnt is that though on the one hand there has been an evolutionary regression of some structures associated with vision, on the other hand there has been a maintenance, even enhancement, of other structures whose relevance has remained undiminished. There is evidence even in the Icase of humans that the capabilities of the visual system extend beyond mere object identification.