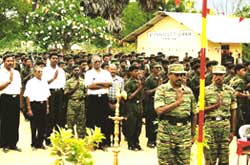 The uncertainty clouding the fates of thousands of tsunami victims in areas controlled by the Liberation Tigers of Tamil Eelam (ltte) deepened with a July 15, 2005, order of Sri Lanka's Supreme Court (sc). The sc blocked a deal between the government and the rebel group to share billions of dollars of foreign aid for the victims. It also opposed the setting up of the headquarters of the proposed Post Tsunami Operational Management Structure (p-toms) in the rebel-held area.

The collaboration between the government and the rebels was necessitated because international donors, many of whom have banned the ltte, needed p-toms to channel their aid instead of giving it to the rebels directly. p-toms funds were to be under the custody of an international lender. But the court held that this fund, to which donors would have contributed, would also be illegal.

The court ruling followed opposition of the move by the Marxist People's Liberation Front, which recently quit the ruling coalition government in protest. The sc said four clauses in the p-toms agreement are against the country's constitution and they shall remain on hold till a petition against the deal is settled. The next hearing on the matter is on September 12, 2005.