Iranian lawyer Mohammad Mostafaei had to leave the country for protesting child executions.

In the Islamic Republic children are publically executed, though they cannot vote till they turn 16. Ten-year- old girls are sentenced to death for having sex.  In many of these cases the young girls are silent victims of rape and molestation.   Amnesty International states that Iran often offends international regulations against the death penalty.

Iranian bloggers launched a “blogging game” to protest executions on the occasion of World Day Against The Death Penalty on October 10. 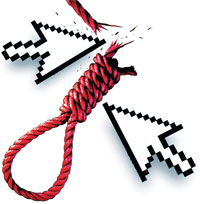 The game was kickstarted by a blogger named Goresh (Roar). Many people justify executions on the Internet. The campaign is meant to counter such arguments and to mobilise the public against legally sanctioned murders.

Now that bloggers have picked up the debate in one of the most influential media, let us hope the public and the authorities will be able to hear their side of the story.