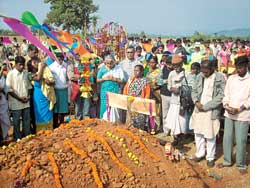 No land for power plant, no entry to outsiders, say villagers

THIRTY kilometres from Dumka town in Jharkhand is a village where 150 families are resolute about not giving up their land for a proposed power plant. Bloodshed only made their resolve stronger when on December 6, 2008, one villager was killed and 10 injured in a clash with the police. Now, entry to Aamgachhi village is blocked as villagers armed with bows and arrows stand guard along bamboo barricades.

"This is our curfew. We will fight the police and company officials," said Pradeep Tudu, a villager. The villagers had made it clear to state government officials that they would not allow land acquisition when the government signed a deal with cesc Ltd, a private firm in Kolkata, in 2005. They had stopped company officials from completing a land survey in 2005 and more recently, in September 2008, did not allow district officials to complete another land survey. The proposed project would displace 5,000 people, villagers said.

On December 6, more than 1,500 villagers had taken to the streets to protest the arrest of five activists. Four of them were arrested on charges of holding demonstrations and disrupting land surveys. Another activist was accused of stealing a motorcycle.

"Munni Hansda has been implicated in a false case of lifting a motorcycle, which, belongs to her husband. The government is trying to quell the people's movement," alleged Banku, a member of Jharkhand Ulgulan Manch, a non-profit fighting the industry drive there. Banku added that even though the police was aware that the December 6 protest would be peaceful, it fired 300 rounds of bullets. "The police lathi-charged when over 1,500 villagers reached the police barricade. Villagers retaliated and the police opened fire."

Ravana Soren, a villager who was injured during the protest, refused to go to the hospital. "What if policemen torture me? I would rather die than suffer at their hands," said Soren.

The district administration clarified the firing had nothing to do with land. "The tribals gathered to secure the release of the activists. We have not acquired an inch of land for the power plant. The police took tough action because villagers had arms with them. We will acquire land only after negotiations between company officials and tribals," said Prashant Kumar, deputy commissioner, Dumka.

Company officials blamed the non-profit for inciting the villagers. "We have held discussions and invited the villagers to Dumka for the final discussion. We will give much beyond the government's resettlement and rehabilitation policy. But each time we wanted to reach a consensus, the Jharkhand Ulgulan Manch created trouble. They did not allow villagers to come to Dumka. We are open to negotiations. Power is essential. The state has a shortfall of about 1,400 mega watt," said Sanjiv Sengupta, head of cesc's project in Jharkhand.

He added that the company was procuring barren land and that two villages, Pokharia and Aamgachhi, in Kathikund block would be required.

Kathikund has a rich reserve of coal and the company has given Rs 5.39 crore for acquisition of a little more than 130 hectares (ha) owned by villagers, about 20 ha of government land and 17 ha of forestland for the power plant and a coal block 12 km away from the villages. There is also provision for a checkdam on the Brahamani river.

The villagers complained of little support from their representatives. "Even 10 days after the firing incident, the chief minister could not muster the courage to face us. We had great faith in Shibu Soren (the chief minister). He is not just a tribal, he is our leader. They are all sold to the company. My brother died and none of the leaders came to punish the police officers who fired without any provocation," said Enam Tudu, younger brother of 48-year-old deceased Lakhiram Tudu.

Lakhiram is survived by eight dependent members. "We have no clue how we will run the household," said Enam. Banku recalled the incident in 2001 when the state government killed 10 tribal villagers in a police firing. The people were protesting against the Koel Karo Hydropower Project.

It's yesterday once more for Jharkhand's tribals.