A new instrument measures the concentration of haemoglobin in the blood 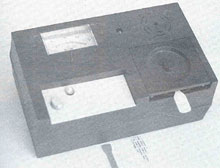 THE concentration of blood haemoglobin -- a biochemical compound present in red blood cells that ferries oxygen in the human body -- is a clinical parameter to assess the nutritional status of an individual. Now, the process of measuring the haemoglobin concentration has been made simpler, cheaper and more accurate following the invention of an instrument called Optelheme by scientists from the Centre for Biomedical Engineering (CBE), Indian Institute of Technology (IIT), New Delhi.

Optelheme is based on a new science -- haemoglobinometry -- formulated at the IIT and the All-India Institute of Medical Sciences, New Delhi. Says Sneh Anand of the CBE, IIT, Delhi, "The concept was developed to overcome the limitations of conventional haemoglobinometry."

Most conventional clinical methods for estimating haemoglobin concentration are based on a process of colour assessment by the light reflected from the blood specimen. This process entails the volume of the blood sample to be measured accurately before being processed in several chemicals. This makes the process cumbersome, time-consuming and unsuitable for field use.

Says Anand, "Small errors in the measurement of blood volume leads to large errors in haemoglobin value. Since colour comparison of the sample being tested with the standard specimen is done by direct vision, differentiation of various shades of colour presents difficulties and is often a source of error." Although colour comparison can also be done by a laboratory based spectrophotometer, the process turns out to be very expensive.

Optelheme, on the other hand, works on the principle of reflectance photometry -- measurement of the ratio of light reflected from a specimen under examination to that reflected from a standard specimen. The "reflectance" is determined by means of an optical and electronic arrangement so that a direct readout of the haemoglobin value is obtained.

"The process is very fast and is simpler than any of the conventional methods," claims Anand. The blood from a pricked finger is dropped on a special filter paper strip which costs about 10 paise. This strip is pretreated with a chemical that converts the haemoglobin into a stable compound. The strip with the blood sample is then allowed to dry in open air for 2 minutes before it is placed in the Optelheme, which immediately gives the readout.

Test trials of Optelheme, explains Anand, have been conducted in Jabhua, Madhya Pradesh, where haemoglobin deficiency is endemic in tribal children. The results have been satisfactory.