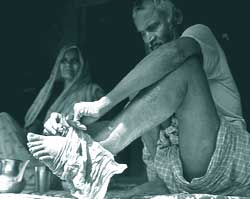 scientists have detected arsenic-induced damage to a type of white blood cells among people from North 24-Parganas district in West Bengal. "Chromosomal aberrations (cas) like breaks, deletions and gaps in peripheral lymphocytes (a type of white blood cell) have been found in people drinking water contaminated with arsenic," says Ashok Kumar Giri, who heads a team of researchers from two Kolkata-based institutes -- the Indian Institute of Chemical Biology and the Regional Institute of Opthalmology -- and the Leiden University Medical Center of the Netherlands.

"What is more, arsenic has robbed the peripheral lymphocytes of their ability to proliferate," he adds. "Such arsenic-induced chromosomal damage predicts an increased future carcinogenic risk by this metalloid," write Giri and his teammates in Cytogenetic and Genome Research (Vol 104, Nos 1-4). Since cas are similar to dna changes occurring in cells undergoing carcinogenesis, they can be used as biomarkers to assess arsenic's cancer risk, they add.

The study focused on a group of 165 people aged 15-70 years from the district. Some of the people who had been drinking arsenic-contaminated water for more than five years had skin lesions. For the control group, 155 age-sex-matched unexposed individuals were selected from the state's East Midnapur district.

The mean arsenic content of the exposed group's drinking water was 215 parts per billion (ppb), while its concentration for people in the unexposed group was 9 ppb. The safe limit recommended by the World Health Organization (who) is 50 ppb.

Samples of peripheral lymphocytes, nails, hair and urine were taken from both groups. Lab studies showed that in the exposed group, as many as 0.09 ca were found per cell (peripheral lymphocyte) as compared to 0.02 ca per cell for the other group. The mean arsenic content in nails, hair and urine of the exposed people was 6720 ppb, 4140 ppb and 162 ppb respectively compared to controls' much lower 530 ppb, 330 ppb and about 12 ppb respectively.

The team found chronic exposure to arsenic led to skin pigmentation, keratosis (horny growth of the skin) and even cancer. "Of all the arsenic exposed people, only 15-20 per cent show skin lesions," claims Giri. "This means that genetic variations play a role in arsenic-induced toxicity." He says the metalloid can also bring about chromosomal damage in other types of cells. "Epidemiological studies show the occurrence of cancer of skin, liver and lung in arsenic-exposed population." According to Subhas Mukherjee of Calcutta Medical College, who studied arsenic-induced toxicity in the state's Murshidabad district, arsenic delays the normal growth of a child.

Recently, under Giri's leadership, the Council of Scientific and Industrial Research has launched a mission mode project to hunt down the genes responsible for arsenic-induced toxicity and carcinogenic effects.