Dutch export of flowers has fallen in the face of increasing competition from other countries and a drop in the quality of plants at home. 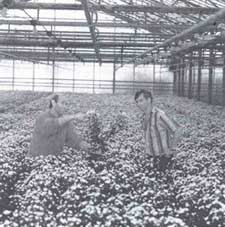 STRINGENT environmental stipulations and falling quality, due to techniques used to boost production, have resulted in a crisis in the high-tech, $2.8 billion a year Dutch flower industry.

Dutch growers are also hurting because of increasing competition from southern European countries, Israel and some developing countries, which has reduced prices at flower auctions and cut export of Dutch ornamentals by 14 per cent in May 1992 as compared to the previous year. Exports to France, for example, dropped 37.4 per cent.

Floriculture expert Hans de Vries blames the low prices on the poor quality of Dutch plants. Citing a study that rated various qualities in plants, De Vries says less than 40 per cent of Dutch rose varieties were found satisfactory (FloraCulture International, Vol 2, No 5).
Under pressure from environmentalists, who are concerned about excessive use of fertilisers and pesticides by Dutch floriculturists, the government has decreed that by the end of the century, all greenhouse floriculture must be in a closed system to ensure toxic chemicals do not reach the subsoil and that all the water used is recycled. This will put an additional financial burden on the growers, who are already beset by falling prices. Some growers experimenting with the closed system complain of increasing salinity of the recycled water.

Scientists at the floriculture research station in Aalsmeer are reportedly working on eliminating such problems and generally improving greenhouses with better recirculation systems and efficient monitoring. They also recommend the floor of a greenhouse should be made of rigid plates, because they work better than plastic film.

Aalsmeer scientists are also working on improving the quality of Dutch plants so they become more competitive. One study shows some rose varieties grow better when supplementary lighting is used in greenhouses. But roses from such plants wilt faster because lengthy exposure to artificial light takes away the ability of minute leaf pores to close, which means plant moisture escapes continuously. Aalsmeer scientists say this problem can be solved if roses grown under supplementary lighting are placed in cold water immediately after they are cut.

Another area of research at Aalsmeer involves improving the mother plant stock from which cuttings are taken or which is used in tissue culture. The quality of the cuttings is important to avoid the fungal black rot infection, which is a problem for rose-growers.

A popular tissue culture technique is somatic embryogenesis, which utilises certain non-reproductive cells that develop into embryo-like structures. This technique can yield hundreds of new plants that are clones of the mother plant. So far, the technique has only been tried on vegetables, but scientists are experimenting with it in floriculture.

Transporting cut flowers often causes a problem of wilting because of inadequate airing. But, wrapping flowers in a plastic film prevents condensation and the flowers are protected from sudden temperature changes. Australian scientists have developed a plastic film that keeps fruits fresh for upto six weeks and are now working on adapting the film to protect such flowers as roses and carnations.