Blue Lady docks in Gujarat but no word on breaking yet 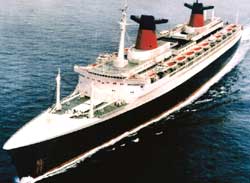 The Blue Lady touched Indian shores in the first week of July. The 38,000-tonne ocean-liner's year-long search for a breaking yard has been dogged with controversies, with groups such as the Ban Asbestos Network of India claiming that "it contains 1,200 tonnes of asbestos and unknown quantities of other toxins". The vessel has finally been allowed to dock at Pipavav in Gujarat at the Supreme Court's (sc's) instance. This permission has, however, been granted on humanitarian grounds; the apex court has referred the question of breaking down the ship at Gujarat's Alang shipbreaking yard to a technical committee. Anyhow, Blue Lady's anchoring at India has raised eyebrows, especially because Le Clemenceau, a French ship with similar antecedents, was denied entry into Alang in February this year.

Built in 1960 for the French government, Blue Lady was originally called ss France.In 1979, it was acquired by the Norwegian Cruise Lines (ncl), which it converted into a luxury liner and rechristened it ss Norway. The ship's life as a luxury vessel was cut short in 2003 when a boiler explosion at Miami in the us killed eight crew members and caused the vessel extensive damage. Repairs meant huge expenses, so ncl decided against it. ss Norway was towed to Bremerhaven in Germany, where it remained till 2005. The ship began seeking a breaking yard in Asia last year.
"ncl withheld vital information from German authorities while seeking permission for the ship's departure from Bremerhaven on May 25, 2005. The company had decided to dispose of the vessel in December 2004. But its permission request only stated that ss Norway was going to Asia for repairs," says a report of the ngo Platform on Shipbreaking, a global pressure group. "ss Norway's movement out of Germany is a violation of Article 16 of the European Union Waste Shipment Regulation, Articles 4 and 6 of the Basel Convention, and the Basel Ban Amendment," the group adds.

Other revelations vindicate ngo Platform's claims. Among them is the recent revelation that in a span of a few months in 2004, ncl reduced ss Norway's value by us $14.5 million. By December 2004, the former luxury liner's owners were only interested in its scrap value: us $12.3 million. Confidential reports of Pierre and Vacances, the French company which studied ss Norway's contents, show that this amount made decontamination of the vessel's asbestos content unviable. Even partial decontamination would have meant spending us $22 million more than the ship's scrap value.

ncl did not want to spend that much. ss Norway left German shores in May 2005 and docked at Klang in Malaysia in August 2005, where it was renamed Blue Lady. In February this year, it made an unsuccessful attempt to dock at Chittagong, Bangladesh, and then in May, Blue Lady set sail for Alang. Malaysia's maritime authorities were, however, told that the ship was departing for Dubai, where it would undergo repairs. The deception did not pay, environmentalist groups got a hang of it and a case was filed in the sc, following which the Gujarat Pollution Control Board barred ss Norway from entering Alang. The apex court, however, allowed ss Norway entry into the country after its owners pleaded that negotiating rough seas in monsoon would be a tough ask for the decrepit vessel.

But no sooner did it receive this permission, Blue Lady sailed away to Fujairah in Dubai. It was reported that some investors were interested in converting it into a floating hotel. The ship's ownership is, however, a murky matter. Down To Earth has a "bill of sale" for ss Norway according to which ncl sold the ship to Bridgend Shipping Limited, Liberia, for " us $10" and other good and valuable consideration". Bridgend Shipping is reported to hold interests in Haryana Ship Demolitions Private limited, which claims to have bought the ship to be scrapped in India. According to other reports, the ship has been brought by Indian scrappers on a purchase promise of us $15 million.

The Blue Lady has abandoned its Dubai detour and docked at Pipavav. On July 14, a five-member team of experts from Central and Gujarat Pollution Control boards, National Institute of Occupational Health and Gujarat Maritime Board completed their five-day inspection of the ship. They have submitted their report to the sc's technical panel. "We will submit our report to the court by July 30," says Pradipto Ghosh, head of the panel and secretary, Union ministry for environment and forests.