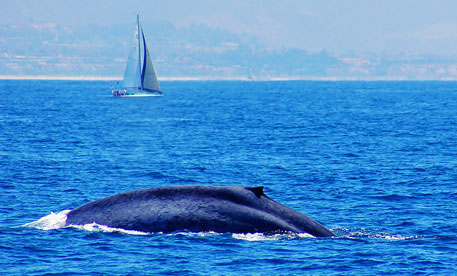 The California blue whales, listed as endangered by the International Union for the Conservation of Nature, have recovered in numbers, but remain vulnerable to ship strikes, says a new research by the University of Washington.

Scientists say this is the only variety of blue whales to have recovered from whaling (the hunting of whales primarily for meat and oil). According to the study, published in the journal Marine Mammal Science, blue whales were targeted by commercial whaling operations from the early 1900s to the 1970s, which resulted in the depletion of the Antarctic blue whales. Hunting operations, most of which were carried out by Russian fleets, killed 346,000 of the mammals on the colder waters of the Antarctic, says a BBC report.

By working out the numbers lost to whaling, the researchers were able to calculate the present historic population of the blue whales—97 per cent of their past numbers. Measuring up to 33 metres in length, blue whales are the largest animals in the world. There are two distinct varieties of the mammal—the California group and the ones that live near Japan and Russia. The California variety is found all the way from the Gulf of Alaska to Costa Rica, the report adds.

Although the population of blue whales has bounced back significantly, scientists express concern about their vulnerability to ship strikes. Most of these happen off the coast of California, the report says.

“California blue whales are recovering because we took actions to stop catches and start monitoring. If we hadn’t, the population might have been pushed to near extinction—an unfortunate fate suffered by other blue whale populations,” lead researcher Cole Monnahan told the BBC.

Citing authors and experts, the study says that the most risky area for blue whales is the Santa Barbara Channel in the Pacific Ocean, where shipping lanes intersect with common feeding areas for blue whales, leading to an average of 1.8 blue whale strikes reported per year during 2005-2010. The study demonstrates an increasing impact to the blue whale population as vessel traffic increases and ship strikes become more common. “Mitigation approaches will become increasingly necessary if the rate of ship strikes increases faster than predicted,” it says. The study proposes a variety of monitoring and mitigation techniques, such as onboard observers, remote sensing and passive acoustic monitoring to better detect and avoid whales.