The species has short,woolly golden fur which earned it the name midastactus after King Midas 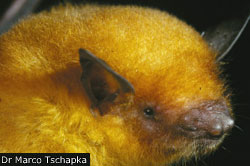 A gold-coloured bat, previously considered to be just one of the various types of bats named Myotis simus of South America, has been found to be a different species altogether.

Myotis midastactus has short and woolly golden fur which earned it the name midastactus after the Greek legend of King Midas who turned everything he touched into gold. The species eats insects living inside hollow trees and in holes in the ground during the day. It is endemic to Bolivia.

The bat has been described in a paper published online in the Journal of Mammalogy in July. The paper says that the colour of the bat’s fur and its cranial and external features “unquestionably distinguish it from all other Neotropical Myotis” According to a report published in the BBC, the researchers carried out “morphological and morphometric statistical analyses of 27 museum specimens kept in several museums in the US and Brazil, to confirm the existence of a distinct species”.

There are more than 100 species of Myotis—bats with rat-like ears—in the world.