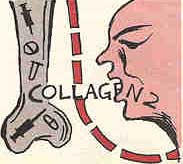 Rheumatoid arthritis, painful bone disorder in the joints, can be prevented, say researchers from the Kings College, and the Guys Hospital, both in London, by oral intakes of collagen two, a proteinaceous natural substance widely found in the joint tissues of vertebrates.

Apart from arthritis, several other auto-immune diseases like multiple sclerosis, where the human immune system mistakenly attacks healthy tissues in the body, can be tackled by the Oral Tolerisation Programme.

In rheumatoid arthritis the tissue that comes under auto-immune attack is a chemical constituent of some form of the cartilage (the connective tissue with tough elastic fibres that is present at the joints of two bones to cushion strong impacts and reduce friction). Only some of the cartilage tissues contain collagen two, though ordinary collagen is found quite widely in the body.

Professor Gabriel Payani, of Guys Hospital, found that collagen two when injected in test animals like mice, stimulates lymphocytes, white blood cells that are the key functionaries of the immune system, which attack joint tissues. In 1986, Norman Staines of the Kings College made the pioneering discovery that collagen two, when given orally to mice and rats, actually suppressed arthritic symptoms. Gabriel Kingsley of the rheumatology unit of the Guys Hospital hypothesised that it was collagen two that comes under autoimmune attack in arthritic humans. Oral doses of collagen two, which normally does not form part of human diet, have a completely opposite effect to that which occurs when it is injected.

Kingsley's later researches were focused on why collagen two, when taken orally triggered such a different response. The answer, as it now appears, is quite simple. "The suppression is obviously necessary, otherwise the immune system would soon grow weary of reacting to every foreign protein in the food we eat. The idea is to. take a protein (collagen two, in this case) against which the patient is making an immune response. Intestinal absorption suppresses the immune response. The (immune) system then reacts less against the joint tissues and the arthritis eventually settles," explains Kingsley.

An American pharmaceutical and biotechnological firm, Auto Immune of Lexington, Massachusetts, us, recently tested oral toleration of human patients. Though the patients were only a few in number the therapy has shown promising results. The trial about to begin at the Guys Hospital, involving a large number of patients, should show firm conclusions and researchers would know whether there is a need to modify the treatment before using it clinically.

Once successful, the therapy has many advantages over traditional injections and toxic drugs to counter rheumatoid arthritis. "Essentially, there would be no side effects and long-term treatment would be possible," opines Kingsley. The collagen used in the trials are being processed from chicken and beef bones. Though the doctors are yet to hit upon the right dosage, many patients would prefer chewing well-cooked bones to unwelcome injections and other drugs.