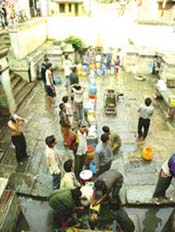 On January 31, 2007, the Nepal government got temporary reprieve in a long-standing controversy over the Kathmandu water supply bill. Its ministry of physical planning and works signed an agreement with the protesting Sanyukta Sangharsh Samiti, a union of employees of the Nepal Water Supply Corporation, the government water supply utility, to break the impasse over the bill. The Nepal government has agreed to bring in changes in the Nepal Water Supply Corporation (Third Amendment) Bill.

The workers' union had been protesting for a month-and-a-half against the bill passed by the House of Representatives on January 4, 2007. Ever since the bill was tabled in parliament, the union had stopped water supply to major government buildings and recently, also to the prime minister's residence, the royal palace and ministers' quarters. Prime minister Girija Prasad Koirala had to intervene and direct the physical planning ministry to sort out the matter. The important clause in the agreement is the government's promise to amend the bill keeping in mind the interests of consumers. The agreement states that the management switchover to a private company would not result in employee retrenchment and their employment status would remain same. Besides, employees can only be asked to leave through a voluntary retirement scheme. The agreement also said that the employees working on contract basis and as daily wage labourers would be made permanent within 15 days.


Activists call the bill a guise to privatise the water sector under pressure from multilateral development banks like the Asian Development Bank (adb). They allege that privatisation will increase water tariff by about five times. The government has not explored other cheaper alternatives to supply water to the valley, they claim. The bill enables the government to manage Kathmandu valley's water supply system through a semi-autonomous drinking water management board. The point of contention in the bill is the appointment of a private company to look after the day-to-day water supply in the valley. The government has awarded this contract to a controversial British company Severn Trent Water International Limited. In 2004, it was charged for fraud in Europe and in 2005, it was taken to task by the Office of Water Services, an industry regulator in the uk, for overcharging customers (see 'Fraudulent deal', Down To Earth, April 15, 2006).
Privatisation of the water supply system was a precondition of adb for sanctioning a loan to the us$500 million-Melamchi Water Supply Project of the Nepal government. It is an inter-basin water supply project designed to repair the existing water supply and distribution system of the Kathmandu valley, along with the diversion of 170 mld (million litres per day) water from Melamchi river in the Sindupalchowk district's Kosi basin. adb is the lead financier of the project along with other agencies. Several donors had pulled out of the project in the last two years due to alleged corruption in handling the project. To look into the matter, a royal enquiry commission was set up. It found the charges valid and jailed a former prime minister. During the emergency period (2004-2005) under the king's rule, all political parties opposed the project. However, only four parliamentarians had opposed the bill when it was tabled in the parliament.
"The privatisation law is against the new constitution (adopted on January 15, 2007) and the country's Comprehensive Peace Accord.We are trying to convince new as well as old parliamentarians to amend the law," says Gopal Siwakoti Chintan, co-ordinator of Water and Energy Users' Federation-Nepal (wafed), a leading advocacy group based in Kathmandu. Several consumer welfare organisations--wafed, Federation of Water and Sanitation Users' Nepal, Consumers' Protection Forum Nepal and ngo Federation Kathmandu--had filed a writ petition against the bill in the country's Supreme Court. "Since a writ has been filed against the bill, enactment of the bill in parliament is invalid," argues Chintan. However, adb presses for the bill citing its loan agreement with Nepal government. "We are not pressuring the government but have only reminded them of the agreement signed with us that should be implemented," said Keiichi Tamaki, senior urban development specialist of adb.

The government may have made temporary peace with the protesting employees, but given the political atmosphere of the country, nobody can say for sure which way the Melamchi waters will flow in the future.