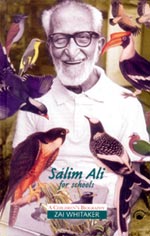 "It all started with a little yellow sparrow in his backyard..." Sparrows have had a lot to do with Birdman Slim Ali's career as India's best-known ornithologist. We learn that he had a pet sparrow as a child. He asked his sister Kamoo to stitch a pair shorts for the bird, so that it would not make a mess wherever it went. Of course, birds don't have waists, so the shorts never staid up.

Incongruous as it may seem to us today, during Slim Ali's childhood, in the early years of the 1900s, an interest in birds and hunting them down were two sides of the same coin. Many naturalists began their careers as pucca shikaris. One day, young Slim's curiosity led him to shoot dead a male sparrow that was standing outside a hole in the wall, guarding its nest, with the female brooding the eggs. Soon, however, Slim noticed that the missing male had been replaced by another one. This one met with the same fate. Over a period of seven days, Slim shot eight male sparrows, only to find a new one taking its place. This observation was published in a well-known journal many years later, when Slim had become famous.

The sparrow story that started Slim's career, however, takes place in Chembur, today part of Mumbai city. Uncle Amir, who looked after Slim and his eight brothers and sisters after their parents' early death, would often take his large family to Chembur for the summer holidays. During one of the many shooting sessions there, Slim noticed that one of the dead male sparrows looked different from the others. It had a yellow patch on its throat. Amir suggested Slim take the bird to the Bombay Natural History Society (bnhs). The dead sparrow was identified as the Yellowthroated Sparrow. Thus began Slim's association with the bnhs.

Grandniece Zai Whittaker's biography of Slim bhai is fascinating, written in clear and coherent prose for children. Budding naturalists, or anyone with even a passing interest in wildlife and the outdoors, will love this!