After he was done with the phonograph and the electric bulb, the American scientist Thomas Alva Edison focused his attention on a living doll with perfectly feminine features. For years the prolific inventor remained obsessed with the bizarre thought of little girls spewing forth from his factory, as if they were lamps or clocks. The endeavour was a disastrous failure, says the much acclaimed book... 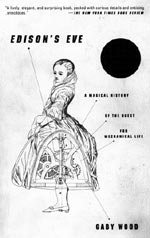 After he was done with the phonograph and the electric bulb, the American scientist Thomas Alva Edition focused his attention on a living doll with perfectly feminine features. For years the prolific inventor remained obsessed with the bizarre thought of little girls spewing forth from his factory, as if they were lamps or clocks. The endeavour was a disastrous failure, says the much acclaimed book under review.

Edison's Eve places the nineteenth century inventor's forays within a history of experiments in automation that began in seventeenth century. The book diligently pursues our Promethean yearnings, from the obscure clockwork intestines of defecating robot ducks to today's robots. In five well-researched chapters, Wood describes the ways humans built machines to resemble themselves over three centuries.

Her story begins with the creations of the eighteenth-century Frenchman Jacques de Vaucanson, explaining how his elaborate automatons -- most notably a mechanical flute player and a mechanical duck apparently capable of eating and defecating -- fascinated all of Europe. But Edison's Eve is no linear narrative of the triumph of the Cartesian idea of the animal body being a living machine. The crowds who gawked at Vaucanson's automations wanted to see science on display, but they were also moved by nostalgia for a lost world of fabulism and enchantment.

After this promising beginning, the book disappoints a tad. It often appears as the work of a zealous but raw research student more interested in ferreting out curious details than in crafting a rigorous analysis. Often the research yields interesting antiques like Wolfgang von Kempelen's 1769 chess-playing machine, constructed to look like a Turkish gentleman.
No less a star attraction than Vaucanson's automations, the Turk took on the Russian empress, Catherine the Great and the inventor, Benjamin Franklin; the writer Edgar Allan Poe, fascinated by the automata's ability to think, wrote a long essay on it. For more than half a century the chess player drew large crowds in England, in the continent and in the us on the premise that it was the world's first thinking machine. It was also dogged by suspicions throughout and in the 1830's the sham was exposed: the precursor to ibm's Deep Blue was actually powered by a chess whiz crouching in its bowels.

What did it mean to be enlisted by a machine? Jean Francois Mouret, who spent years inside the Turk, died drunk and miserable -- so Wood concludes that the chess whiz was actually "the victim of an experiment of an experiment whose essential object was to ascertain the most essential human faculty: What does a machine need in order to become a human? And can human beings reduce themselves to that faculty alone?" Wood returns to questions such as these with irritating frequency, but without providing any answers.

But Edison's Eve also does a wonderful job of rambling through history, plotting disparate, though forgotten, landmarks. One such is the chapter on George Melies -- the pioneer of cinema who made dolls come to life. "Melies transferred the quest of earlier android makers to a new virtual reality. He made the human body do impossible things, and proved how mechanical or puppet-like our celluloid selves could be".

The author's meticulous research and story-telling abilities do not always carry disparate chapters through. The last chapter on the Doll Family -- four dwarves who acted in the 1920s production, Wizard of Oz -- is shoehorned awkwardly into the book's man and machine theme. Even more disappointing is the author's refusal to engage with contemporary cybertheorists like Donna Haraway and Sadie Plant and her only brief drive-by mentions of the fantasy relationship between children and dolls. The lack of an analysis makes reading Edison's Eve into a guided tour of a marvelous museum: your curiosity is aroused and you long for more.