In 1992 the Indian Parliament approved of the 73rd constitutional amendment, which made it mandatory for state governments to devolve powers to local bodies. More than a decade later, Vinod Vyasulu, director, Centre for Budget and Policy Studies, Bangalore and a longtime observer of panchayati raj institutions, reviews this decade in Karnataka, also presenting Madhya Pradesh and Uttar Pradesh as case studies 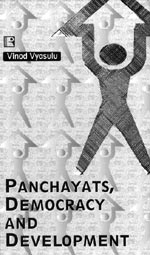 In 1992 the Indian Parliament approved of the 73rd constitutional amendment, which made it mandatory for state governments to devolve powers to local bodies. More than a decade later, Vinod Vyasulu, director, Centre for Budget and Policy Studies, Bangalore and a longtime observer of panchayati raj institutions (pris), reviews this decade in Karnataka, also presenting Madhya Pradesh and Uttar Pradesh as case studies.

Vyasulu starts anecdotally. There is a "typical project" to implement a poverty alleviation programme for an international donor. In its zeal for change, the project team involves pris as just one stakeholder among many. Such approaches are reductive, for "local government, the panchayat system, is the state, in all its majesty". Vyasulu emphasises that pris are primarily a political institution. However new, whatever the convulsions they face, they are legitimate government at the local level and cannot be ignored by grassroot development projects.

Vyasulu then reviews the state of affairs in Karnataka, which he says was the harbinger of decentralised rule. The state's experiment with local bodies started in the 1960s; in 1983 a new law was passed that began to be implemented from 1987. The zilla panchayat head was given the status of a minister of state; he had control over the chief secretary of the district (an ias officer). Vyasulu laments that today the power local bodies possess remains on paper. Local governments atually have no control over the district bureaucracy and this makes pris shaky. The head of the zilla panchayat continues to be an employee of the state government, with the power to merely refer to the state government those decisions the zilla panchayat feels are not in tune with the law.

Vyasulu dissects the financial functioning of pris with precision. Not only do panchayats lack flexibility in deciding the heads of expenditure (most funds are 'tied'), they also cannot mobilise resources on their own. In this sphere, too, local bodies depend on the state government and the Centre. 'Tied' funds means funds alloted under specific heads (determined at the 'top') which simply lapse if unused. Thus often, the local bodies become a mere conduit for directing expenditure. Though panchayats have some tax power, very little tax is actually collected, so much are they forced to remain dependent on state governments.

Vyasulu seeks to learn lessons from other states. The not-so-well-known Uttar Pradesh (up) experiment is particularly interesting. It arose out of a fiscal crisis, says Vyasulu, usually a situation that forces politicians to experiment. Gram panchayats are responsible for primary education, state tubewells, women and child development, animal husbandry, fair price shops, agriculture and rural development. Funds for all these functions are handled by a gram nidhi operated by the panchayat president and secretary. The financial powers are also substantial. Vyasulu claims up is the first state to have committed itself to a non-discretionary transfer of funds. Thus, from Rs 20 crore in 1996-97, gram panchayats got nearly Rs 330 crore in 1999-2000. The conclusion is simple: if the state government takes an interest, decentralisation will be painless.

Vyasulu makes his admiration for Madhya Pradesh in the field of primary education -- the Rajiv Gandhi Shiksha Mission -- very clear. He presents the case well, highlighting local involvement and the recognition of the centrality of pris in implementation as crucial reasons for success. But he leaves other vital sectors, such as health and village resources, out of the discussion.

The book recommends several ways to make pris effective within the existing framework. For instance, the district planning committee could receive the plans and programmes of the lower level bodies and engage in dialogue for financial allocation. Also, panchayats could start using geographical information systems to map village resources, essential information for grassroots governance.

Finally, Vyasulu cautions that since decentralisation came to be implemented from above, without there being a real demand for it, it is now necessary to see that people's participation and interest has to be ensured. It goes without saying that if the local governments do function as real units of self-government, then people's endorsement won't be long in coming. But how does one bell that cat called 'political will'?